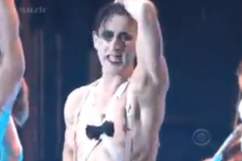 2. Grant Shaffer Is His Husband

As residents of America we would have loved to marry there, but we hope that soon the civil rights that we have been afforded in the U.K. will be available to all gay Americans, and we look forward to celebrating not only our marriage, but the end of prejudice.

Then, in 2012, the two had a wedding once again in New York. People reports:

The Scottish actor, 46, who stars in The Good Wife, and his commercial-illustrator partner were married Saturday at New York’s Soho Grand Hotel, five years to the day after celebrating their civil partnership in London.

Having a lie down and a peruse of my just re-released racy saucy novel, Tommy's Tale. The perfect summer read! pic.twitter.com/vBhjF0ENiD

Though Cumming is widely known for his fantastic stage acting, his countless roles on the big screen and his many television appearances, he’s also a talented writer. He’s a contributing editor for Marie Claire magazine and also has contributed to Newsweek, Modern Painters, Out, Black Book and The Wall Street Journal. He even wrote his own novel “Tommy’s Tale.” Wikipedia describes the book as “centering around the life of a bisexual London resident named Tommy. The book is a first-person narrative, and revolves around an early mid-life crisis triggered when Tommy “accidentally” proclaims his love for his friend-with-benefits, Charlie, when high on ecstasy.”

5. His Dance in Romy And Michele’s High School Reunion Is Unforgettable

If you have never seen Cumming’s dance at the end of the comedy Romy And Michele’s High School Reunion, then you are a deprived individual. No worries. Have a look at the classically ridiculous and delightfully cheesy scene in the above video.