In his fourth time hosting the Tony Awards, Hugh Jackman brings his charm and talent to Radio City Music Hall on June 8.

The Australian native actually won a Tony for his hosting in 2004, so audiences should expect great things at 2014’s 68th Annual Tony Awards.

Broadway.com even put together the best Jackman Tony GIFs to celebrate the repeat occasion.

Let’s learn about the actor and performer.

His 2003 Broadway debut, in The Boy from Oz, earned him his first Tony award.

He won that accolade for portraying 1970s gay singer-songwriter Peter Allen, who died of complications from AIDS in 1992.

In the video above, Jackman struts his stuff, performing, “Not the Boy Door,” from the musical.

2. He Married His First Costar

After he left drama school, he earned the role that introduced him to his future wife.
In Correlli, an Australian drama, he met actress Deborra-Lee Furness.

They married in 1996 and, according to the actor, they are “never apart more than two weeks.”

I’m an indecisive person … when I met Deb … it was the clearest thing in the world to me. I knew 100 percent.

Furness, who now serves as a board member of Worldwide Orphans in Australia, had a hard time getting pregnant.

Jackman told Katie Couric, “It is a difficult time. The miscarriage thing — apparently it happens to one in three pregnancies — but it’s very, very rarely talked about.”

The couple adopted their son, Oscar, who is African-American, Caucasian, Hawaiian and Cherokee, in 2000.

Five years later, they adopted Ava, who is half Mexican and half German, at 4 days old.

4. He Has to Deal With Gay Rumors

Jackman doesn’t mind them as much as his wife.

His Boy from Oz performance, which included a kiss between Jackman and his male costar, sparked gay rumors.

Jackman doesn’t seem to be bothered as much as his wife is.

In a well-known interview he did with Barbara Walters, shown above, he didn’t deny the speculation, but instead told a story about his wife dealing with it.

In a joint interview the couple did for 60 Minutes, Furness said:

It’s just offensive. If he was gay, fine, he would say he’s gay. It has gotten so out of whack … it’s stupid, yeah, it’s annoying, because it’s not true.

The versatile actor has played Wolverine in seven movies over the course of 14 years.

In fact, he plays the comic book hero in X Men: Days of Future Past, which is in theaters now.

At one point, you’re right, I said I was pretty sure [that ‘Wolverine 3’ would be my last outing in the role]. But I’m less sure as it goes along. Because after seeing this movie, the whole thing feels fresher to me than ever. And during this movie…I don’t want to spoil anything, but it’s kind of like a clean slate, so who knows where it’s going to go. As long as I have the passion for it and the fans will have me. 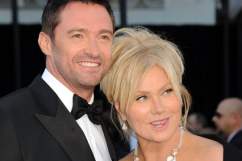