If you’re ready for the premiere of Pretty Little Liars’ fifth season tonight, we’ve got all the important spoilers, predictions, and video clips you’ll need. Read on to see what you can expect tonight as well as the rest of the season.

– Detective Wilden’s killer will be revealed in the premiere, as reported by TV Line.

– The identity of who shot Ezra will be revealed early in the season and, because he knows the identity of A, his life will be in danger as he recovers in the hospital.

– Popwatch has given their input on the six suspects they believe to be “A”: Jason DiLaurentis, Cece Drake, Paige McCullers, Byron Montgomery, Mr. DiLaurentis, and Melissa Hastings. Who do you think A is?

Various characters will learn A’s identity this season, but the audience will only be given clues.

– According to the International Business Times:

Ali’s return is expected to add drama to Ezra and Aria’s love story. There are speculations that a love triangle might bring more twists in the already twisted show. “There’s also a chance for another love triangle that some fans have been talking about and that’s Alison, Emily and Paige,” show creator Marlene King told Hollywood life.

– TV Line reports that there will be a “significant” death and a “game-changing time jump” this season “jumping” college. In addition, Shane Coffey’s Holden will return to Rosewood this summer.

– There will be some new characters on the show. Sugarscape reports:

First up is Sydney, who will play a girl on the swim team who befriends Emily and who will turn up in episode 3.

– Hollywood Life writes about some good news for Paily fans:

Emily (Shay Mitchell) and Paige (Lindsey Shaw) might get back together in Season 5B!

The reconciliation is said to occur on an episode titled “How the ‘A’ Stole Christmas.”

– The IB Times writes that:

Some reports suggest the new season may focus on Ali and the mystery of her disappearance. Some fans suspect that the real Ali is actually dead and it is her twin who is the real ‘A’ and is creating havoc in the other liar’s life.

Alison’s sexuality will be addressed in Season 5, and her history with Paige will play out in an “emotional” storyline.

Among the many storylines currently being discussed for Season 5B is the introduction of the show’s first gay male character. 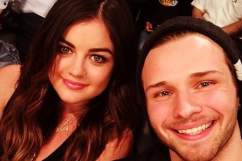