She’s beautiful, stylish, and about to be the Queen of England. Princess Letizia of Asutrias, married to Prince Felipe of Asutrias, will be taking the throne after an announcement early Monday morning of King Juan Carlos’s abdication. She’s going to steal the spotlight with this new title, which means her fashion tastes and personal life are about to be big news. Read on to find out more about the new queen.

1. She’s a Former News Anchor and Reported Live from Ground Zero After the 9/11 Attacks

Before marrying Felipe, Prince of Asturias, Letizia secured a stable career as a journalist and news anchor. She followed in her father’s footsteps and studied journalism at the Complutense University of Madrid and later attended the Institute for Studies in Audiovisual Journalism where she received her Master’s. Afterwards, she worked on the Siglo XXI in Mexico. In 2000, Letizia anchored for TVE, and was eventually promoted to anchor the channel’s evening news program. The soon-to-be queen also reported live from DC for the presidential elections. She reported live from Ground Zero immediately following the 9/11 attacks, and from Iraq several times during the war.

In 1998, the now 41-year-old beauty married Alonso Guerrero Pérez in Badajoz, after dating for ten years. By 1999, the two had filed for divorce. They have no children together, and her husband is remarried to María del Carmen Astero Martín, a teacher. The Spanish monarchy has applauded Letizia for her modern approach to royalty, which is amplified by the fact that she is the first divorcee to become Queen in Spanish history.

The fact that she’s a divorcee is receiving a lot of attention from the media. A caption in the Daily Mail reports:

Despite the fact she is a divorcee, the public generally approved of Letizia since she represented the modern woman.

3. Her Fashion is Similar to Kate Middleton

Not only did the soon-to-be Queen come from a modest background like Kate, but she has similar taste to the Duchess of Cambridge. The Daily Mail posted an article comparing the two royal’s styles and they’re strikingly similar. The article claims,

She has become noticeably slimmer and more elegant in the ten years since her marriage.Like Kate, her fashion choices are analysed and minutely picked over by the national press.

Some of her fashion choices have been frowned upon in recent years. An article by the Huffington Post claims “Princess Letizia’s Hat is Bringing Back Bad Millinery Memories.” They write,

The last time Letizia wore such a memorable hat was during the British royal wedding in 2011 (and she looked lovely). This time around, she must have taken a cue from Princess Beatrice’s infamous topper — the shock factor was definitely comparable.

4. Her Cousin Wrote a Book About Her and Claimed She Had an Abortion

While some media sites have commended her tasteful fashion, Letizia has been the subject of a fair amount of criticism in the press. The Daily Mail reports,

She has been perceived as ‘cold’ by some sectors of the media.
And last year, Letizia’s cousin David Roscasolano wrote a book ‘Goodbye Princess’ about his royal relation.

Roscasolano’s book is quite gossipy– it it, he claims that the princess had an abortion, tried to cover it up, and then asked Roscasolano to burn the medical evidence. This would have been during a time that abortions were illegal in Spain. Though the book makes it seem like Roscasolano has a grudge against his cousin, he claims that he didn’t write the book for that reason, and openly admitted he was trying to cash in on her newfound fame.

The most recent reports of the book claim most of what Roscasolano published was a lie.

5. She Met Felipe on Assignment

Their romantic relationship began in November 2002, while Letizia was covering a story about an oil spillage in Northern Spain and Felipe was on site to offer his support. In 2003, Letizia quit her job even though she had just been offered a promotion to anchor the national news channel. Days after leaving work, her engagement to Felipe was announced. While her previous marriage was a source of skepticism in the Catholic nation, it didn’t prevent her from marrying Felipe in any way. The Daily Beast reports,

As her first marriage had not taken place in a church, the country’s Roman Catholic authorities did not oppose her remarriage and gave permission for her to be married in a lavish – if rain-soaked – service at Almudena Cathedral in Madrid. 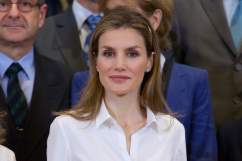 Queen Letizia Photos: The Pictures You Need to See