On the series premiere of FX’s Tyrant, Bassam “Barry” Al-Fayeed returns to his home country in the Middle East for the first time in 20 years. Barry takes his family to attend his nephew’s wedding, but he’s not thrilled about the trip.

Here’s the top spoilers you need to know:

1. Barry Does Not Want to Make the Trip

Barry clearly doesn’t want to make this trip home. At his wife Molly’s insistence though, the Al-Fayeed family boards an empty plane and fly off to Abuddin. When they arrive, they’re greeted by Barry’s brother Jamal who pulls up in a hot red sports car with Aerosmith’s “Dream On” blaring from the speakers.

2. Jamal Has His Own Rules of Justice

The first appearance of Jamal has him forcing himself on a woman, while her husband and children wait in the next room surrounded by Jamal’s security.

His lack of control stems from his father, Khaled’s abusive tactics growing up and never giving his son any respect. Even as an adult, Jamal still keeps his head down while his father scolds him for not keeping one of the tribal leaders in line. The leader, Walid’s nephew is a terrorist and plans to attack the wedding.

Jamal sends his men for Walid, and starts to beat him up before brother Bassam can step in and suggest a more diplomatic approach. Jamal manages to cut Walid’s hand open, but allows for his brother to invite Walid and his nephew as honored guests to the wedding.

Later at the wedding, Jamal spots his new daughter-in-law speaking with another man that is not his son. He follows her into the powder room and sexually assaults her until she bleeds.

Jamal isn’t done. As he rushes to stop Barry’s plane from returning to the United States, he forces the woman driving with him to give him a blow job. He does what he thinks will keep the tribal leaders in line and the insurgents at bay.

3. Khaled Didn’t Pay Much Attention to Barry Growing Up

In Barry’s flashbacks, Khaled appears to father his eldest son Jamal over Bassam. At at ribbon cutting ceremony, he gives Jamal the honor of cutting the ribbon. When an army truck drives onto the ceremony sight to unleash a bomb, Khaled pushes Jamal out of the way and leaves young Bassam standing there to take the brunt of the explosion.

Later, when Khaled and his army pull innocent men from their homes and shoot them in the street, Khaled sacrifices one of the men for Jamal to shoot. In this case though, Jamal can’t complete his father’s wishes and runs back to the truck. As Khaled tries to coax the boy out, Bassam steps out, picks up the phone Jamal dropped and fires two rounds into the civilian.

Before leaving California, Barry makes a call to his childhood friend Fauzi Nadal back in Abuddin. Once in the country, Barry sneaks out of the hotel and goes to find Fauzi at his mosque. His friend tries to explain what’s really happening in the country. He’s disappointed it took a family wedding for Barry to return and not the riot’s that broke out a year ago.

The U.S. diplomat John Tucker paints a rosier picture of Khaled’s rule. Abuddin has the second-highest mean per capita in the Middle East under Saudi Arabia. Tucker would rather have the wedding’s fireworks coloring the night sky than the fire fights happening in Egypt and Syria.

5. Barry Can’t Run Away This Time

Bassam/Barry’s father suffers an unexpected stroke after the wedding. Jamal overreacts and threatens to kill the doctor if his father dies. Khaled calls his son Bassam/Barry to his death bed and tells him, “I was wrong. It should have been you.” He should have chosen Bassam/Barry to succeed his throne rather than the volatile Jamal.

After Jamal and their mother Amira go see the dying Khaled, Jamal exits and informs his brother and his wife that father has died.

Barry knows he needs to get his family out of the country before the people find out about his father’s death. His son Sami doesn’t want to go, and Barry slaps him hard across the face twice. Molly can’t believe what she just saw, but the family follows Barry out and back to the hotel. They grab their passports and rush to the airport to hop on the first flight to Los Angeles.

Molly wants Barry to speak about his behavior on the trip but he refuses. He just wants to get off the ground, but that’s not happening after his brother drives his car off the side of a cliff. Jamal’s still alive, but the family’s security needs Barry to return to the palace. 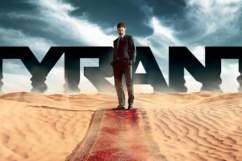