This final trailer will bring a tear to your eye and make you shake your angry fist in the air!

Enjoy the final trailer for this excellent looking summer 2014 blockbuster! So who are you cheering for – the apes or the humans who are lead by that dude who played Commissioner Gordon in the last three Batman films? 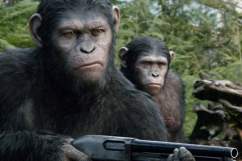 WATCH: ‘Dawn of the Planet of the Apes’ Official 2nd Trailer

Read More
Dawn of the Planet of the Apes, Movie Trailers, Movies, Planet Of The Apes
This final trailer shows us the oncoming conflict between the remaining humans and apes.