Kathryn Prescott is an English actress who has landed herself the lead in the new TV show Finding Carter. Read on for clips from the new show and some background on Prescott.

1. The Finding Carter Premiere Is Intense

Finding Carter is a new show unlike any other MTV drama, which premieres on July 8, 2014 with a two-hour episode. The NY Times gives the plot summary the premiere:

After Carter is arrested, she learns that the woman who raised her, Lori (Milena Govich), is not, in fact, her birth mother, but the woman who kidnapped her from her family when she was 3. Now 16, Carter is summarily thrust back into her birth family: a cold mother, Elizabeth (Cynthia Watros), who also happens to be a police officer looking for the kidnapper; a limp father, David (Alexis Denisof), whose only success as a writer came in the form of a book about the family tragedy; a goody two-shoes twin sister, Taylor (Anna Jacoby-Heron); and a savant younger brother, Grant (Zac Pullam), the only emotionally articulate family member.

2. Carter Stevens Is a Rebellious Teen Who Clashes With her “New” Family

Finding Carter | Kathryn Prescott Interview | MTVSee what the lovely Kat Prescott has to say about playing the role of Carter Stevens.2014-06-27T15:26:35.000Z

Prescott’s character Carter, who is thrust into a family she doesn’t know, rebels against her biological mother, becoming somewhat of a hero to her new brother and sister. The NY Times writes:

“My other mom’s a felon; she’s the one I take after,” she says — is a hellion, stomping through her new house with glee, stealing the family’s car and getting drunk at parties sound-tracked by Iggy Azalea. Pried from her life and dumped into foreign territory, she is pure disruption, inspiring envy in Taylor and admiration in Grant. And she doesn’t give Elizabeth an inch: “You’re stiff! You’re humorless! You’re a control freak! You operate from this place of fear!”

This rebellion actually turns into a good thing for her new family and Prescott actually brings some balance and happiness.

By the second episode, Carter is splattering her paint all over her new canvas: getting Taylor drunk, giving Grant hope for a cool life, even helping Elizabeth and David to communicate with each other. But no one’s quite gotten to her yet. She’s creating her own little “Pleasantville,” letting everyone around her breathe for the first time while she decides whether to stay or go.

3. Megan Prescott Is Her Twin Sister

Kathryn has a twin. In July 2008, Prescott and her twin sister Megan were in an episode of the soap opera Doctors. The two of them played twin sisters Amy and Charlotte Wilcox in an episode titled “Dare, Double Dare, Truth”. Megan also popped up as Kathryn’s on-screen twin on the show Skins. Kathryn is six minutes older than her sister.

Megan has her own acting resume as well. Check it out here.

In addition to starring as Carter Stevens, Prescott is also known as Penelope from Reign. TV Line talks about when Prescott was first cast in the role:

The CW drama has cast Kathryn Prescott as Penelope, a kitchen servant who, as part of an annual castle tradition, finds a bean in her slice of cake and becomes queen for a day, TVLine has learned exclusively … Penelope is described as shy and cheerful at first glance, but she’s got a sexy and darkly manipulative side, too.

Check out “Penelope” in the above episode clip.

5. Prescott’s Sexuality Has Been Up for Debate

According to Wikipedia, Prescott’s sexuality has been debated by fans.

Prescott revealed that she would prefer to not label herself regarding her sexuality, and that ‘labels are for cans’ (following rumours regarding the homosexuality of her character in Skins), but does not believe that “people are defined by their sexuality”, suggesting that “it doesn’t change who you are as a person”.

On the show Skins, Prescott played the role of Emily Fitch. 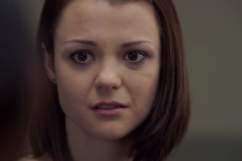