Maya Rudolph gave birth to her fourth child on Aug. 1, 2013 and she has just filed a birth certificate with the child’s name. Maya and her husband Paul Thomas Anderson welcomed their third daughter Minnie Ida, according to TMZ.

Here’s what you need to learn about the funny woman’s baby girl.

Rudolph and her husband named their fourth child after the former Saturday Night Live star’s mother Minnie Riperton. Ripperton was a soul singer who died shortly before her daughter seventh birthday. The couple’s eldest child Pearl has the middle name Minnie.

Rudolph confirmed her fourth pregnancy in an appearance on The Ellen Show last spring.

Rudolph quickly returned to filming her projects or worked through her pregnancy with each of her children. She took time off Saturday Night Live to deliver Pearl. She filmed Grown Ups while pregnant with Lucille and returned to Up All Night three months after giving birth to Jack. She filmed the upcoming movie Inherent Vice while pregnant with Minnie and started shooting The Maya Rudolph Show seven months after giving birth to her fourth child.

A birth certificate wasn’t filed immediately for Minnie Ida, because she was delivered at home. Her parents filed the certificate just under California’s one year deadline that was up on Minnie Ida’s birthday of Aug. 1.

Rudolph spoke about her fourth pregnancy while promoting Grown Ups 2 on Ellen in the video above.

4. Rudolph Is Filming ‘The Nest’ With Tina Fey and Amy Poehler

Rudolph is teaming up with her former SNL’s co-stars Tina Fey and Amy Poehler in their new film The Nest, due out Dec. 18, 2015. The movie is about two sisters (Fey and Poehler) “who decide to throw one last house party before their parents sell their family home,” according to IMDb.

Earlier this summer, Rudolph starred in her own variety show called The Maya Rudolph Show.

5. Rudolph and Anderson Are Not Married

Rudolph is not married to her baby daddy Anderson. The two have been in a committed relationship since 2001. 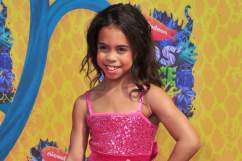