There have been rumors that Rosie O’Donnell was in negotiations to re-join talk show The View, but now it is confirmed. TMZ gives details on O’Donnell as well as others who may join the show:

The negotiations fired up a few days ago and the deal was almost completed by end of day business Monday. The deal is now complete. Rosie will join Whoopi Goldberg on the show. As we reported, producers are also looking for a Latina and a conservative. Two conservative candidates who are being scoped are Abby Huntsman and Margret Hoover. 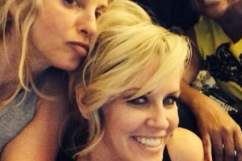