Weird Al Yankovic returns with another hilarious parody called “Tacky,” inspired by Pharrell’s Oscar-nominated song “Happy.” The music video for “Tacky” kicks off a week of new videos from the comedic songwriter that he calls #8videos8days.

There are 8 MUSIC VIDEOS for my new album. Are you ready for this? NO, YOU’RE NOT! GET READY!!! #MandatoryFun

Weird Al releases his new album Mandatory Fun on July 15. The pop song parodist told Nerdist that he thinks its his “best album to date.”

Watch the video below and catch the next seven videos at Weird Al’s website. 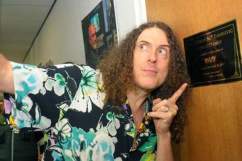