Many couples are getting married over Labor Day weekend and, most importantly, Ashlee Simpson marries Evan Ross today. We’ve got all the details on the nuptials right here for you too. The weekend kicked off with a birthday dinner for the groom Evan Ross at STK Downtown in New York City. According to Us Weekly, the celebrity couple are getting married in Connecticut with Simpson’s sister Jessica as the matron of honor.

The groom arranged for the nuptials to take place in Greenwich, Connecticut at the estate of his mother, Diana Ross. The legendary singer Diana Ross is said to have had her hand in helping with the wedding planning, including being the officiant, and also sang at the affair. In addition, there is a performance by Stevie Wonder. After a short rain delay, the ceremony began and E! News reports that the bride wore Neil Lane Jewelry.

Simpson, 29, will be walked down the aisle by Bronx, her 5-year-old son with ex-husband Pete Wentz, sources tell Us. She will be wearing a pearl-embellished wedding dress and is set to be sparkling in $750,000 of Neil Lane rubies and diamonds.

The theme of the wedding is very Bohemian and there will be dream catchers, eclectic touches, and a “mix-and-match palette” to reflect the theme. Jessica Simpson’s daughter Maxwell, 2, and son Ace, 14 months, will serve as flower girl and ring bearer at the ceremony. Below have a look at an Instagram photo Jessica posted with the caption: “Flower Power with @stephenieleighpearson for @ashleesimpsonofficial #bridesmaids”

For an idea as to what the wedding may look like, check out a Twit pic from their engagement party below:

What an amazing engagement party with all of our loved ones! We gettin' married :) pic.twitter.com/xdQLFerlIk 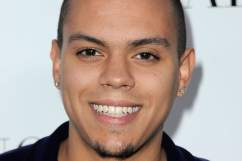