Dorothy Wang and Cooper Mount became “Instagram official” during the first season of #RichKids of Beverly Hills. The Wire got the dish on the couple’s online statement of affection, writing:

When Dorothy gets a nice shot with new love Cooper at 1Oak, she doesn’t hesitate. (“THAT’S OUR PHOTO!”) When you know, you know. Post it.

On the new season of #RichKids of Beverly Hills, Dorothy invites the gang to China for an event that her parents are having. Boyfriend Cooper begins to get cold feet at the thought of meeting Dorothy’s family and calls Dorothy’s BFF Morgan Stewart to express his concerns. Morgan basically tells him to suck it up. Before Cooper backs out, Dorothy meets up with him and the two chat about the trip, but Cooper makes no mention of not going to China. Dorothy also confesses to the camera that she loves Cooper.

In the end, Cooper doesn’t come and Dorothy is very upset, though she tries to put on a brave face. 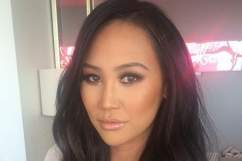 After Cooper decides to back out of China, the gang talks to Dorothy and tells her she deserves someone who treats her much better than Cooper. They don’t paint a pretty picture of the guy and make it sound like he’s never there for Dorothy.

4. Cooper’s Followed Dorothy On Many of Her Gigs

Dorothy Wang makes appearances and clubs and things like that. We can see Cooper tagging along to hang with his girl in several photos (like the one above) posted on Dorothy’s Instagram.

5. The Current Status Of Dorothy And Cooper Is Unknown

A while ago, Dorothy had posted a photo of a designer handbag on her Instagram, with the hashtag #breakupbirkin but recently, there was a photo of her with Cooper posted online as well. The only part that’s questionable is that Cooper is a little blurred in the pic. The photo can be seen above, and was captioned wishing Cooper a happy birthday. Below have a look at Dorothy’s break up bag.