For kids who grew up in the ’90’s, Full House was a big part of their Friday nights.

When the show ended its run in 1995, fans were sad to see the Tanner family, who became part of their families, leave them.

Although viewers can still watch the sitcom in syndication on Nickelodeon, they’ve missed out on years in the on-screen family’s life.

This might all change if what TV Guide reported is true.

Here’s what we know so far about the highly anticipated reunion.

1. Uncle Jesse Is Pushing for It

The actor, who played Uncle Jesse, is supposedly heading up the campaign to bring it back to TV in some form.

In fact, when he visited Watch What Happens Live in January, he said, We’re sort of working on a twist on a sequel. But we don’t know if it’s going to happen yet or not.”

The three close friends, Stamos, Saget, and Coulier, make this Superbowl commercial in 2014.

2. Danny is Staying Out of It

In an interview with People in April, Bob Saget said:

John [Stamos] is such a good guy, and I think he would want it to happen in some way if it could. There’s some stuff going on, I don’t get involved in it, where people were trying to put some energy into it … [But] I don’t think it will happen in a way that it would be everybody.

The trendy duo, who created their own fashion line, have not commented.

People put it best by saying:

When it comes to Full House reunions of any kind – the cast’s 25th anniversary get-together, Candace Cameron Bure’s successful run on Dancing with the Stars, the Jimmy Fallon spoof and recent photo ops – Mary-Kate and Ashley Olsen are noticeably absent, so it’s safe to assume they’d be out.

TV Guide reports that the girls are joining in on the reunion fun.

Candace Cameron Bure and Andrea Barber, who played best friends on the show, are still close. In fact, Cameron Bure posted this video to her YouTube channel. Watch the former costars as they belt out New Kids on the Block’s “I’ll Be Loving You Forever.”

5. Aunt Becky Was Open to Reading the Script

Loughlin came on stage in 2013 when Jesse and the Rippers, Jesse’s band on the show, reunited on The Tonight Show with Jimmy Fallon to kiss her former on-screen husband.

In March of 2013, Lori Loughlin was interviewed by the Huffington Post, and said she’d be willing to read the script.

She said, in the clip below:

It’s been talked about…I don’t know, I mean, if it were to come up, I guess we would cross that bridge when we got to it and see what the script was like. 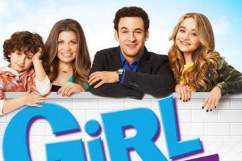