For his role as TV-news reporter Will McAvoy on The Newsroom, Jeff Daniels is nominated for a 2014 Emmy Award for Outstanding Lead Actor in a Drama Series.

He told MLive, “Newsroom has had a lot of success, but it’s also been a bit of a rocky road critically. You just never know how these things are going to pan out. There’s so much good work going on in television now, so many great performances, so many actors and writers flocking to television. It’s a great time to be in television, especially on the cable end of things.”

1. He Taped the Last Season of ‘The Newsroom’

In an interview with America Jr, he explained why The Newsroom only lasted three seasons:

Well, it’s a hard show to do. It’s a hard show to act with all of that dialogue. It’s even harder to write all of that dialogue. Even harder than that, you’ve got to drop great scripts on the desk every two weeks. To maintain the highest level, Aaron felt he needed more time. We all felt we needed more time and just didn’t have it. That’s the television schedule. Every two weeks, you’re doing the next episode. There’s an argument to be made for 3-0. You could go up to four or five or six, now you have people comparing seasons–which season they like better. Now you have actors no longer with the show because they moved on or the show had run out of stories and you kind of kept going two more seasons. We don’t have that.

After the success of Dumb and Dumber, the buddy comedy he made with Jim Carrey in 2014, the two are back with a sequel in November.

Daniels told America Jr that the new film was just as fun as the first. “From the first day of shooting on, we were back into it. Jim’s a good friend as we enjoy being with each other off-camera and I think that shows up on-camera as well. I know we threw everything we had at it. If that counts for anything, I like our chances,” he said.

In the 1983 tearjerker, he played the husband of Debra Winger’s character.

4. He Married His High School Sweetheart

He married Kathleen Rosemary Treado in 1979.

In 1986, the couple moved back to Michigan to raise their 3 children.

“It was home. Kathleen and I had both been raised here; good enough for us, good enough for them…. I knew I was going to be on the road a lot. I just felt it was a great place to raise our kids,” he told MLive.

5. He Dabbles in Music

His career also including making music, and he is very passionate about it. “I love the music. I enjoy the music. The music I do, whether I’m gigging or whether I’m recording, I do that year round. And I can take that with me when I go do an acting job,” he told the Huffington Post.

On his website, he describes his musical career as him having “written about 400 songs, played over 300 gigs the past 12 years from Maine to Alaska to Californ-i-a.” 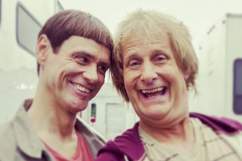