Check out all the info on Miss Pennsylvania Amanda Smith as she competes for the title of Miss America 2015.

1. She Was a Talent Competition Winner in the Preliminaries

This past Thursday, September 11, 2014, Smith took home the win for the talent competition at the preliminaries for Miss America 2015. Miss Maryland Jade Kenny won the swimsuit competition. Smith sang “Wishing You Were Somehow Here Again” from the musical “Phantom Of The Opera.” It was the first song she ever sang in a competition when she was 15 years old.

2. Musical Theater Is Her Major

Smith has been singing since she was 2 or 3 years old. Currently, she’s attending Carnegie Mellon University in Pittsburgh, where she’s working on her bachelor’s degree in musical theater, so that $2,000 win from the preliminaries should really help with her tuition. Smith states that she can’t imagine doing anything else.

3. She Grew Up On an Ostrich Ranch

It was not a typical upbringing for Amanda Smith, who grew up on an ostrich ranch. The Press of Atlantic City reports:

Amanda said that story is often a good ice breaker as she meets new people. Her job was to incubate the eggs and take care of them. “I’m definitely an animal …lover,” she said. So much so that at one point she was known for rescuing litters of kittens. “My mom had to eventually cut me off,” she joked of her habit of helping every litter she could. But she said proudly, “I always found them homes.”

Smith’s platform is to stress the importance of fitness and nutrition, most particularly in relation to cancer. Smith stated that she’s lost quite a few family members to cancer, so a healthy lifestyle is very important to her. Her parents own a vitamin company, so healthy eating is second nature to her and she always makes sure two have “two green things” on her plate.

5. When She’s Not Competing In Pageants, Smith Works As a Waitress

When Smith is not at school or competing for a crown, she works at a local restaurant as a waitress. She says that she loves her job because she loves meeting new people and socializing. She told the Press of Atlantic City that she was back at work the Monday after winning the crown of Miss Pennsylvania. 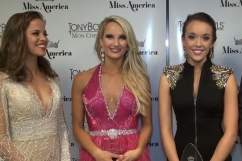 Read More
Miss America
Miss Pennsylvania Amanda Smith is vying for the 2015 Miss America crown. Check out all the facts on Smith, who already won in the preliminary competition.