Derick Dillard and Jill (Duggar) Dillared are all anyone can talk about on 19 Kids and Counting. Check out the facts on the couple’s wedding, their baby news, and more below.

1. Their Wedding Will be the Focus of the New Season of 19 Kids And Counting

For the new season of 19 Kids and Counting, we will get to see Derick Dillard and Jill Duggar plan their wedding and get married. K Pop Starz writes:

This season will open with the details of Jill Duggar and Derick Dillard’s June wedding. With the behind-the-scenes of the wedding, everything from dress fittings to rehearsal dinner preparations, ‘19 Kids and Counting’ will show the blossoming romance between the new couple.

The two recently revealed that “marriage is great” and well-worth the wait since the two waited until their wedding day for anything physical in their relationship.

Just a few weeks after tying the knot, the couple announced they were having their first child. Derick told the Christian Post about the values he hopes to pass down to his son or daughter:

Well, ultimately, we want to be an example for them. For a daughter, I want to show her how a man should treat her, just like Jill’s dad did for her,” Derick said. “And just be the best dad I can be to both my sons and daughters and really purpose to teach them the Word of God early on and pray that they will come to the Lord early in life. And helping them be open, not afraid to come to us about anything.

Both of our parents have had the hearts of their children, knowing that they can come to them and talk about anything. And then, just really leading by example and purposing to have a Godly marriage and one that is focused on the Lord. And hopefully the children will learn to fear God and be a servant of all.

3. Jill and Derick Fell In Love on Skype

Jill and Derick met via Skype. Jill talked about their getting acquainted to People:

I am so happy. Our story is so very unique. The first time we talked, he was in Japan, we met in Nepal, he spent time in India and Israel and then came back to Arkansas where he met my family. We have a very international story even though we live so close.

In addition, it was actually Jill’s father who set the two of them up. Mr. Duggar explained the fix up to People saying:

I had gotten an email from Derick a few years ago and gave him my phone number so he could share the work he was doing in Nepal. I was impressed with him as I got to know him over the years. He sounded like an amazing young man. I felt like from the beginning, they had similar personalities and goals. I thought they would hit it off.

A couple weeks ago, Jill posted the following adorable caption on Instagram to celebrate her meeting her husband on Skype:

4. The Proposal Happened on the Show

Last season of 19 Kids and Counting ended with Derick proposing to Jill with the help of a serenade from a country singer. Have a look at Derick getting ready for the big event in the above video clip.

5. Derick Comes From a Small Family

Of course, Jill Duggar comes from a huge family. Her husband Derick, however, has just one brother. The Christian Post reports:

Jill grew up in a large family, while Derick was raised with only one brother. His father passed away, leaving him with just his mother. But the two have come together and merged families.

The two relish in having a large family together and Jill revealed:

I’ve always dreamed of being a mother and having kids and so, it’s something that I’ve prepared for while growing up and taking care of babies and loving on them. 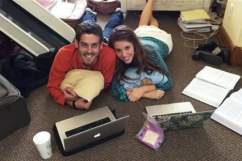 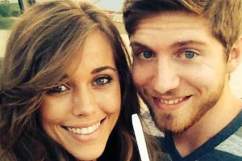 Read More
Reality TV, TV
Get to know Derick Dillard and Jill Duggar, the newly married couple from 19 Kids and Counting, who are expecting their first baby.