It was a touching moment on The View this morning as Broadway star Kristen Chenoweth sang a wonderful tribute to the late comedian Joan Rivers.

On the show, Chenoweth sang the song “Borrowed Angels.” It was the season premiere of The View, which saw a huge shake-up, introducing Rosie Perez and Nicolle Wallace to the panel. After the tribute, longtime co-host of the show, Whoopi Goldberg said:

Joan always knew how to leave people laughing, and nobody did it like she did. … She was our best friend. …There’d be time when I’d be sitting on the couch, and she’d say something, and the laugh was from deep down. When you get the chance to see a great artist — and she was a great artist — it’s hard when they go. 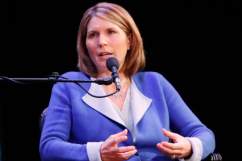 Nicolle Wallace, ‘The View’: 5 Facts Facts You Need to Know