Predictions & Winner: Lesnar completely dominated Cena at SummerSlam 2014. Cena knows this, which is why he’s shown a more aggressive side weeks after his defeat. When these two behemoths return for their massive rematch, we think it will go much longer. Lesnar will pile up on the suplexes once again, but we think Cena will shock the crowd and pull off some heel tactics. In order to put down Brock, we think he’s going to go above and beyond the call of duty and be extra violent against Lesnar. So who do we think’s gonna prevail? We’re gonna have to go with Lesnar on this one. His championship reign has just begun and it would be dumb to to end it so soon. Cena will take another L here. The question after this match will then be this: Who’s next for Lesnar?

Make sure you come back here when we cover the results and highlights from WWE Night of Champions 2014! 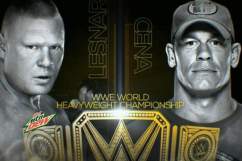 WWE Night of Champions 2014: The Results & Highlights You Need to Know