On October 9’s episode of Parenthood, Mae Whitman’s character, Amber, tells her ex, Ryan, that she is pregnant with his child.

Audiences will cry along with Amber, who seems to tear up in almost every episode of the NBC drama.
In fact for her waterworks, Buzzfeed called her the “best crier in Hollywood for nearly two decades.”

When asked about her emotionally charged scenes, she told Glamour that the ones opposite Ryan, played by Matt Lauria, are draining.

“There were a lot of times during the Matt Lauria story line where I would just go to a bar near my house after and get a beer and stare off into space just to recover from all the emotions. When it comes to crying, if you don’t feel it, you don’t feel it. You’re just in a different place, and that’s honest too,” she said.

Learn more about the girl who has been a Hollywood staple from a very young age.

1. She Likes Amber Being Pregnant

As Season 6 (and the last) of Parenthood debuted, we learned that Amber is pregnant with her ex’s child. Whitman welcomes the plot twist in Amber’s life and told Glamour,

“I really liked it. I wanted something like this to happen because I want to see her have something in her life that’s going to move her forward. I think we’ve probably all had similar things where you have this weird relapse with somebody that you love.”

As far as the Ryan and Amber dynamic goes, Whitman told ET, “I love what Ryan and Amber bring to each other. But, personally, in my own Mae Whitman world, I’m not a marriage person, or someone who would want that as a young person, so it’s been interesting to find that within myself.”

Lauren Graham plays her mother on the show, and the pair have become extremely close.

“I don’t remember what my life was like before her. She has shaped my existence so much. She’s more than a best friend: She’s my role model, she’s a mother, she’s a sister. I mist up even talking about her,” she told Glamour.

At just 6, her first film was opposite Meg Ryan in When a Man Loves a Woman , and from there, she continued to land roles playing the children of A-listers.

“Being on a movie set when you have a great strong people there supporting you can be very nurturing. You get to explore these creative parts of yourself as a child that most people don’t explore until they’re in college,’ she told TV Line.

Other mentors included George Clooney, who played her dad in One Fine Day, and Sandra Bullock who was her mother in Hope Floats.

She told Glamour about bonding with her on screen parental figures:

…especially George Clooney and Sandy Bullock, I had such a close relationship with them even at that age. They would take me out to dinner. I would go back with Sandy to her trailer and sit in there all day, every day, and my parents would come worriedly knocking, like “I’m sorry, is she annoying?” She’d say, “No, no, we’re hanging out. Get out of here!” So cool, so nice, and I still see them every once in a while. It’s such an intimate thing, shooting a movie with somebody as their child. That’s kind of a relationship that stays with you forever. 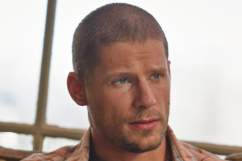 3. She Dated a Rocker & Is Attracted to Girls

Her ex boyfriend is Landon Pigg, also guest starred on Parenthood for a year.

She has a new significant other, but is keeping quiet about it. “I’m pretty secret about that stuff, I guess. I never really care, but I’m pretty secretive. It’s a great relationship,” she dished to Glamour.

Although she’s never dated a woman, she does find girls appealing. She told the magazine, ” I haven’t yet really dated a girl, but there have been numerous girls I’m super attracted to and into.”

4. She’s the Voice of Tinkerbell

In Disney’s Fairies franchise, she gives voice to Tinkerbell, a role that was supposed to go to Brittany Murphy.

When Whitman got the audition in 2008, she was elated to say the least.

“Now you have to understand that — when I was growing up — Peter Pan was my favorite Disney movie. So to now be part of the team that gets to go back to Never Land and have all these new adventures with characters that I’ve loved since childhood … Well, it’s honestly like a dream come true,” she told the Huffington Post.

The iconic role gets her recognized in public. “The other I was walking in Central Park and some people came up to me from behind, and were like, ‘Excuse me. Are you Tinkerbell? We heard you talking,'” she explained in the Disney interview above.

She describes the voice as, “just me, but a little nicer.”

Watch the pair, who are friends in real life, in a scene from 2010’s Scott Pilgrim vs. the World, above.

She told Collider about the film’s success and what it was like working with Cera:

Michael Cera is one of my best friends, so I was excited to work with him and I was just excited to be a part of it. But, I had no idea that it would be a big thing. Going to Comic-Con, where it’s the exact target audience, it was probably misleading because everybody loves comic books there, but it was pretty wild. Comic-Con was amazing. The film was really well received, and I’m really proud of it.

The two also played boyfriend and girlfriend in Arrested Development.

On the show, which was revived for Netflix in 2013, Whitman played Ann Veal, a pastor’s daughter, who dated Cera’s character.