Mila Kunis and Ashton Kutcher had their first baby, a little girl, on September 30.
According to TMZ, the couple went to Cedars-Sinai hospital alone.

The Daily News reported that they named their daughter Wyatt Isabelle.

The low-key couple have been together since April of 2012, and got engaged this February. Learn more about their love story.

The pair played Kelso and Jackie, who began dating on the show’s pilot in 1998.

“My first real kiss ever was with him on the show,” Kunis told W magazine.

They also shared another milestone, going to prom together, even though it was just on screen.

“And when That ’70s Show had a prom, my date for the prom turned out to be my fiancé. We can honestly say that we went to prom together! Although I do think that in that episode I went home with someone else. We don’t talk about that part,” she continued.

2. They Both Want Their Relationship Kept Private

In the interview Kunis did on Ellen, shown above, Kunis blushes and covers her face when the host brings up Kutcher. Even as DeGeneres pushes the conversation, Kunis never mentions him by name or gives any details on their life together, except for the fact that she had just spoken to him.

Kutcher also maintains an air of privacy and told Elle,
“You know, I’ve learned the hard way how valuable privacy is. And I’ve learned that there are a lot of things in your life that really benefit from being private. And relationships are one of them. And I am going to do everything in my power to have this relationship be private.”

However, the paparazzi are still persistent to gets shots of the private pair.

“Every day and every night, the paparazzi are parked outside my house,” Kunis told W. “Today, I had to drive through the Warner Bros. back lot on my way here, just to throw them off.” 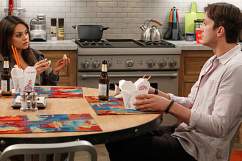 PHOTOS: Sneak Peek of Mila Kunis on ‘Two and a Half Men’

3. They Reunited on Screen

On Two and a Half Men, the pair shared the screen, and even poked fun of their union. Watch the clip above where Kunis’ character Vivian tells Walden, played by Kutcher, taht he seems like the kind of guy who only dates hot actresses.

“God, no. I’d never date an actress. They’re all crazy,” he replies.

Then Vivian says, “I don’t get this whole fascination with celebrities anyway. Who cares who’s dating whom, or who’s engaged to who, or who has a sex tape that no one will ever, ever see.”

4. Ashton Waited to Finalize His Divorce Before Posting This

On December 11, 2013, Kutcher tweeted a photo that shows him kissing Kunis in the dark with the caption “Sunset.”

He filed for divorce from Moore in December of 2012. Rumors that he was dating Kunis began in April of 2012. They got engaged in February of 2014, and Kunis has dished that she never dreamed of getting married.

“From the age of 12, I prepared my parents for no marriage. Then things changed—I found the love of my life. Now my theory on weddings is: Don’t invite anyone. Do it privately and secretly. My parents are okay with that. They’re just excited that I said yes,” she told W.

She also gushed to Marie Claire, saying, “The best day of my life so far was the proposal. I cried. I was a mess. Not to discredit any relationships in my past, but this relationship is different.”

The actress had a relationship with Macaulay Culkin for eight years.

Mila Kunis on Her Pregnancy and EngagementIt's a Hollywood secret that's finally gone public! Mila talked with Ellen about her pregnancy and engagement to Ashton Kutcher.2014-05-09T04:42:13.000Z

“We were actually able to hide it for a very long time. It’s amazing,” she said on Ellen, above. The always private actress didn’t reveal her due date or the baby’s gender.

One of the reasons was the fact that her chest increased in size. “They’ve tripled in size. I was a 34A; now I’m a 36C. I’m so excited! I’m telling everyone I know, ‘Go ahead, touch them!Without being an a**hole, I have to say, I love being pregnant,” she told Marie Claire.

She added, “Two people are allowed in my delivery room. My doctor and my significant other. And he is staying above the action. He’ll be head to head. Not head to vag. Unless he wants to risk his life and see. But I wouldn’t if I were him. I highly doubt he wants to see that being ripped apart and shredded. Because it will be shredded. It’s just a matter of how badly.”