From DC and Marvel right on down to indie comic creators and IDW, these are the comic book panels that you’ll need to take a seat for.

DC Comics has been on a roll lately with its NEW 52 line of comic book adventures. A bunch of the creative minds behind the most popular comics within this fresh DC Universe will show up to speak on their new plotlines and more. You’ll all get a sneak peak at the cover art and more that will make up the newest tales behind DC’s Champions of Justice! It’s time to find out what’s next for the Justice League and their allies!

The Bat-Family has been through hell and back lately. It’s been a wild ride to follow in the comics, so we’re guessing fans are ready to find out what happens next to “The Dark Knight.” Several Batman artists and writers, including Greg Capullo and Brenden Fletcher, will speak about what’s next for “The World’s Greatest Detective.” It’s official – Gotham is rising! For good or for even more evil is what this panel should tell us…

GODHEAD BEGINS! This major Green Lantern storyline will impact DC’s Lantern Corps and give fans a bunch of new baddies to hate 9or possibly appreciate). The New Gods have entered our universe and are ready to use the Lantern Corps’ rings to aid them in their mission. Justin Jordan and several other GL writers/artists will show up to give fans an inside look into this universe spanning storyline.

HAPPEY 75TH ANNIVERSARY, MARVEL! “The House of Ideas” is planning to take over NYCC 2014 on Friday, October 10 with a whole bunch of planned panels and side events. Marvel Comics’ talented artists, writers and devoted fans should gather in Room 1A18 at different points of the day. Why? Because we’re quite sure that Marvel will do something really special for its fanbase and NYCC 2014 attendees.

Good ol’ Wolvie finally bit the bullet! Several X-writers and artists will give their thoughts on this current storyline for Wolverine and also discuss the future of X-Men’s most beloved mutant. Not only will Wolverine be covered here, several other mutants in the comic book storyline will get some info detailed about their comic book futures. Diehard Wolverine fans MUST be in attendance for this one! 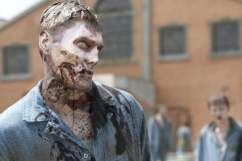