Real Housewives of Atlanta star Phaedra Parks has reportedly hired an attorney to “amicably end her marriage” to imprisoned husband Apollo Nida. Nida was found guilty of bank fraud and was taken into prison last month to start his eight-year sentence. In 2003, Nida was imprisoned for six years on car theft charges. The couple has two sons together – Dylan and Ayden – and Parks reportedly wants to focus on what’s best for her children. E! News reports that the day after Nida went to prison, a rep for Parks issued this statement:

Parks is now putting all of her energy into ensuring the well-being of her two children and making decisions that are in their best interests. This situation has put a tremendous strain on Phaedra and her family and she is working hard to bring back a sense of normalcy to everyone’s lives.

E! also reported that prior to Nida entering prison, he was constantly out partying and mainly talked to his wife when he need money. A source previously told E!:

When he does speak to Phaedra, it’s always about money. He owes a huge debt in restitution and he wants to know if she’s going to help him with it. ‘Are you going to give me money?’ is always his question. He still wants her financial support. 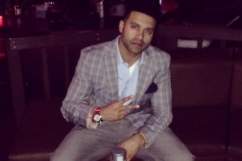