Armando Christian Perez is most known as Pitbull. So, why did he choose this name? Pitbull once said:

Pitbulls bite to lock. The dog is too stupid to lose. And they’re outlawed in Dade County. They’re basically everything that I am. It’s been a constant fight.

Currently, he’s finishing up his tour with Enrique Iglesias, but he’s got plenty of gigs lined up, including tonight’s guest judge gig on Dancing With The Stars. Because Len Goodman is off hosting BBC1’s Strictly Come Dancing, Pitbull will take his place for the night. Other guest judges this season included Kevin Hart and Jessie J. In addition to judging, Pitbull is performing his hit song Fireball.

On November 23, 2014, Pitbull is hosting the 2014 American Music Awards. In addition to hosting, the rapper will also be performing at the Nokia Theatre. Pitbull released the following statement after hearing that he’d be hosting the awards show for the second year in a row:

The harder I work, the luckier I get. Thank you ABC and dick clark productions for the amazing opportunity — more than anything let’s get ready to have fun. Dale!

Pitbull is a global superstar and multi-talented powerhouse, who delivered one of the most exciting shows in American Music Awards history when he hosted in 2013. This year will be no different. We’re working together to create elements of the show that will wow audiences and take the night to a whole new level.

2. Fireball Is the Star’s Latest Hit

It’s safe to say that Pitbull will be performing his hit song Fireball at some of his upcoming performances, most importantly tonight on Dancing With The Stars. Check out the above music video for the popular song.

3. Pitbull Is the Halftime Performer on Thanksgiving Day’s Big Game

Pitbull is the performer at halftime on Thanksgiving Day, November 27, 2014. This will be the game of Dallas Cowboys versus the Philadelphia Eagles, taking place in Cowboys Stadium. USA Today reports:

The rapper’s performance at the game against the Philadelphia Eagles will help kick off the Salvation Army’s annual red-kettle fundraising campaign. This is the 18th year the charity will use the high-profile platform to launch its holiday season. The kettle campaign has raised nearly $1.9 billion since the partnership with the Cowboys began in 1997, including $136 million last year.

4. Drug-Dealing Was His First Profession

Closing deals and taking names ;) my new video for #WildWildLove with @GRL is out this morning.. http://smarturl.it/WWLvid?IQid=gsite

Growing up was rough for Pitbull as his father was a drug-dealer and he ended up in foster care. His parents separated when he was young kid and he was raised by his mother. Later on, he spent time with a foster family in Roswell, Georgia though he was from Miami. His mother kicked him out of her house when he was 16 years old once she learned he had become a drug dealer just like his father had.

5. Pitbull Is Receiving a Hollywood Walk of Fame Star in 2015

There are 30 celebrities receiving a Hollywood Walk of Fame star in 2015 and Pitbull is one of them. Jennifer Garner, Pharrell, Sofia Vergara, Daniel Radcliffe, Paul Rudd, Melissa McCarthy, and Will Ferrell are among the honorees. Maureen Schultz, the chair of the Hollywood Walk of Fame released this statement in June 2014:

We know that the new selections represent the best of the entertainment industry and will be a great addition to the Walk of Fame for both the Hollywood community and fans from around the world who visit Hollywood every year. 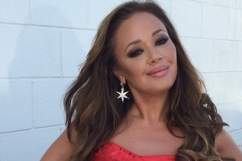 Leah Remini, ‘Dancing With the Stars’: 5 Fast Facts You Need to Know