The performance of “Booty” by Iggy Azalea and Jennifer Lopez has been one of the longest awaited moments of the night at the 2014 American Music Awards. The performance started off with a futuristic countdown. Then, JLo was by herself in a box with the only light being from a lighter JLo was holding. Soon, a bunch of other dancers were shown in boxes below. Lopez was truly seductive in her moves. Soon, Iggy appeared in the box below and JLo had a quick wardrobe change into an even more revealing, lowcut leotard than the one she already had on.

JLo and Iggy grinded on a pole until Iggy left the stage, JLo put on a blazer, and danced with a team of backup dancers. This was an awesome way to close out the show.

Prior to performing “Booty”, Iggy teamed up with Charli XCX for a performance of their hit song “Fancy” with a bunch of male dancers backing them up. Iggy disappeared from stage and ended up on a jungle gym minus Charli XCX to continue the performance with her song “Beg For It.” 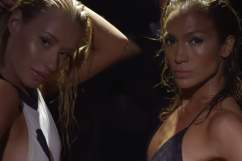