Sadie Robertson and Mark Ballas gave an awesome performance as Adam and Eve on tonight’s episode of Dancing With the Stars. It meant a lot to Robertson to do such an legendary couple from the Bible and she was hoping for a fantastic performance. The judges were blown away and they received a 38 out of 40 for their score. Robertson’s 5’5″ stature always looks taller than she actually is because of her long legs, which consistently help her with her fluidity and length in her dance routines.

When Robertson and Ballas competed against Derek Hough and Bethany Mota in the dance-off portion of tonight’s show, they tied. However, the rules are that head judge Len Goodman gets the final say and he had voted for Mota’s performance. Have a look at Ballas and Robertson in their performance above. 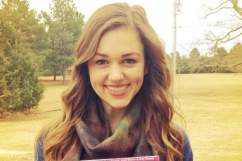