Well this all feels very real all-of-a-sudden. In a tweet that came out around noon on November 6, the new-Disney Star Wars movie was named. It will be called, The Force Awakens.

The tweet adds that principal photography on the movie has now finished, ahead of its 2015 release date. Entertainment Weekly adds, that despite the ending of the photography, there’s still a long way to go on the post-production side of things.

2. We Still Don’t Have Plot Details

The Internet has been awash with plot rumors since the movie was first announced. What has been confirmed, is that The Force Awakens will take place 30 years after the events of The Return of the Jedi. We also know that it w

"No movie sequel is better than The Empire Strikes Back." You might eat those words for Xmas dinner in 2015. Joy & Indigestion to the world!

3. Photography Had Been Taking Place Across the Globe

The principal photography on the J.J. Abrams’ adaptation took place in Abu Dhabi and the legendary Pinewood Studios in London. It was at Pinewood where Harrison Ford broke his leg in an accident involving the Millenium Falcon. Another place used for filming was the small island of Skellig Michael on the western coast of Ireland.

4. There’s Still a Long Way to Go Before the Release

The movie is scheduled for release on December 18, 2015. Directed by J.J. Abrams, the movie will be produced by his long-term collaborator, Bryan Burk, and Lucasfilm honcho, Kathleen Kennedy.

5. This Will be the Only Star Wars Movie With Abrams at the Helm

Some people are already talking about the sequels to the sequels. Episodes VIII and XI will be written and directed by Rian Johnson, according to industry gossip. 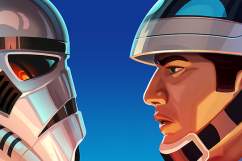