Well, isn’t this a pleasant surprise? The teaser for Jurassic World was released before Thanksgiving, while the planned release of the official trailer was set to air on TV on the holiday. Thank goodness for the interwebs because we now get to see the official trailer a few days earlier than expected.

Be prepared for the next dinosaur invasion once Jurassic World launches on June 12, 2015.

As an added bonus, check out some of these exclusive screenshots from the upcoming film: 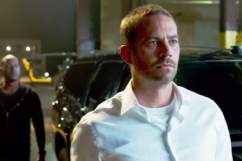