The boyfriend of one of the stars of Mob Wives is “lucky to be alive” after a stabbing at a Brooklyn nightclub. London Rene, the long term partner of Natalie Guercio, was slashed with a box cutter at Club Output in Brooklyn’s Williamsburg neighborhood. According to Natalie Guercio, the suspect in the case is a man named Rudolph “Rudy” Lopez.

1. London Says He Knows Who Stabbed Him

TMZ reports that Rene has told cops he knows who stabbed him but doesn’t know what the motive is. The attack happened late on the night of December 27. The suspect fled the scene with the NYPD still investigating the attack. 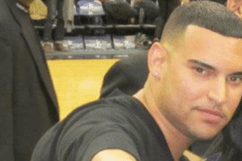 Natalie Guercio, London Rene’s fiery girlfriend, was live tweeting the stabbing at Club Output. She tweeted that her boyfriend required 250 stitches and eventually had to get plastic surgery to repair his face.

London was just sliced in the face @ Club OUTPUT in Brooklyn. In ER, Wood hull hospital getting over 250 in stitches @MobWives @TMZ @VH1

Please pray for him @LondonUKRene

3. He Loves the ‘Nightlife’

During season 4 of Mob Wives, Rene and his girlfriend were house hunting in New York City. Rene is a New Yorker while Guercio lives in Philadelphia. She is the mother of a 10-year-old son from a previous relationship. During their attempts to get a place, Guercio wanted a bigger apartment for her son but Rene wanted to get keep their budget small because of his love of the nightlife.

4. Natalie Guercio Has Been Accused of Cheating on London

During the summer of 2013, Guercio was pictured by Radar Online cosying up to music producer Ryan Banks, who is married. Guercio denied she was cheating on Rene and the couple remained together.

5. Club Output Has a Ban on Photography

The likelihood of anybody snapping a pic of Rene’s attack is unlikely. The New York Times reported in January 2013 that Output strictly enforces a ban on photography at the nightclub. The ban is designed to attract an A-list clientele who want to keep a low profile. The club’s opening in 2013 was a big deal.