As the lovable brainiac Sheldon Cooper on The Big Bang Theory, Jim Parsons wows us with his ability to recite physics-laden lines without skipping a beat.

Now, he will be reciting lines from the Bible in his newest role, playing God.

1. He Will Be Starring in ‘An Act of God’ on Broadway

I am very excited to get the chance to play God on Broadway this summer at Studio 54 in a beautiful new play, "An Act of God," written by David Javerbaum and directed by the brilliant Joe Mantello. I am already praying for inspiration and guidance… @actofgodbway Come see it! We start in early May!

The comedy will open in previews on May 5 at the Roundabout Theater Company’s Studio 54 in Manhattan.

It is based on the book The Last Testament: A Memoir By God by David Javerbaum. The director will be Joe Mantello, a Tony Award winner who is known for plays like Wicked and Assassins.

The New York Times described the show as, “a swirl of satirical riffs on Biblical passages, jokey anecdotes and comic pronouncements.”

Along with the Instagram picture he posted when the news of his role emerged, Parsons wrote:

I am very excited to get the chance to play God on Broadway this summer at Studio 54 in a beautiful new play, “An Act of God,” written by David Javerbaum and directed by the brilliant Joe Mantello. I am already praying for inspiration and guidance… @actofgodbway Come see it! We start in early May!

2. He Came Out While in ‘The Normal Heart’ On Broadway

It was in May of 2012 that the star confirmed his sexuality by allowing a New York Times reporter to include it in his interview.

Toward the end of the article, the writer, Patrick Healy, connected Parsons’ sexuality to the young, gay activist he played in The Normal Heart on Broadway.

The journalist wrote, “The Normal Heart resonated with him on a few levels: Mr. Parsons is gay and in a 10-year relationship.”

He was in Harvey on Broadway, about a man who’s friends with an invisible rabbit.

It had a limited run in 2012. In an interview with Broadway.com, he said he likes rehearsing a play, because it is so different from his television work. “The script’s set, you can just use this time to get more and more in touch with these words…So I’m in heaven.” 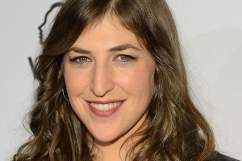 For his portrayal of Sheldon Cooper on The Big Bang Theory, Parsons has earned four Emmys.

When CBS News asked how he memorizes Sheldon’s difficult lines, he said:

One of these days they’re going to break me, I’m positive. But in the meantime, I’m a big note card fiend. I have little cue on the first side. And on the next one will be my entire line I’ll have written out. And I will pace around my house. … That’s what I do for hours on end. And I’m telling you, it’s like memorizing the symbols on the periodic table.

5. His Relationship With His Boyfriend Is an ‘Act of Love’

Graphic designer Todd Spiewak has been dating the actor for over 10 years.

The pair was honored with an Inspiration Award at GLESN Respect Awards in 2013.

At the ceremony, Parsons told the audience, in the clip above:

In fact, The National Enquirer recently reported they were engaged, a rumor that Parsons was quick to dismiss.

In mid August, the paper started the gossip, saying that a friend told them, “Todd has wanted to get married for a long time now, and he told Jim he felt like they were just treading water in their relationship. Jim has kept telling him he wanted to make sure he was settled and secure before he took on such a major change, but Todd shot back, “You’re going to be making more than $20 million a year now, how set do you need to be?”

Parsons went on Instagram to dispel the rumor, captioning the photo above with, “Me and Todd in 2003. Still very happy today… And NOT engaged! #justFYI #NationalEnquirerMakesS—tUp #duh.”