Beyonce sang “Take My Hand Precious Lord,” which was first introduced to her through her mother, at the 2015 Grammys. She appeared as an angel in white, surrounded by a choir of men in all white outfits as well – white dress shirts, blazers, rolled up jeans and no socks. It was a simple performance that was filled with meaning and amazing vocals.

At the end of her performance, Beyonce introduced John Legend and Common, who performed their song “Glory” from the movie Selma.

And, just for fun, when Beyonce didn’t win Album Of The Year tonight and Beck did, Kanye West made a joke, pretending to storm the stage as he did when Taylor Swift beat Beyonce at the Grammys. Check it out in the below video: 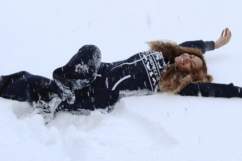