Erik Anders Lang is the husband of music artist Sia. Lang is a director who has made documentaries for brands including Serato, Louis Vuitton, The Guggenheim, Honda, MTV and TED. His personal website reads:

His work centers on the human condition and why we do what we do. His first documentary, produced for Sony Pictures Home Entertainment, tells “The Story of Braeden Reed”, a young child with autism hired to act in the Lasse Hallstrom directed film, Dear John (2010).

His most recent project was a documentary with Bill Murray and Kelly Slater on a documentary, which centers on connections between golf and spirituality.

Lang and Sia first became in engaged in June 2014 and they tied the knot just two months later. On August 2, 2014, the couple got married in a surprise ceremony was held at Sia’s home in Palm Springs, California. Celebrity photographer Terry Richardson shot the nuptials.

Sia is a performer at the 2015 Grammy Awards 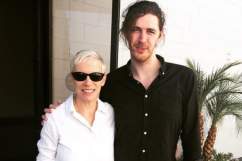