Claire’s U.N. bid runs into trouble. Frank fights off mutiny with a bold address to the country.

Read on for spoilers.

The episode begins with Claire addressing the senate committee regarding her nomination as the Ambassador to the United Nations by Frank. Claire says she understands that it could be viewed as nepotism, but reminds the senate that Frank can only nominate her, and that the senate has to confirm the nomination. Claire then impressively proves her knowledge to the skeptical committee.

Meanwhile at the Oval Office, meets with top DNC members, including House Majority Whip Jackie Sharp. They infor Frank that they don’t want him to vie for the Democratic ticket for 2016 because the DNC needs a new, fresh face… reminding Frank that he never really was elected to the presidency.

Frank does not take this news well and wants to push off their decision until closer to the primaries. They are fearful because the Republicans are united behind Senator Hector Mendoza for the GOP ticket. Frank wants to know who else they are thinking about for the Democratic ticket but the top DNC members play dumb and remind Frank that his decision not to run is “just a request.” But Frank is told that he won’t have their support if he does decide to run. Jackie tells Frank she stands with the party.

Back at Claire’s Ambassador to the United Nations hearing, it’s going equally as bad. She accidentally tells committee member Senator Hector Mendoza that the United States military is irrelevant. Mendoza calls her a hot head. They get into an argument that makes headline news.

2. Things Are Going Downhill for Frank and Claire

After finding out about media inquiry into a drone strike that hurt an American citizen under President Walker’s leadership, Frank has to take a meeting with solicitor general Heather Dunbar in the Oval Office. He tells her he wants to clear the air about her report and Frank’s pardons. Heather then goes on about the drone case at hand against the government, but Frank excuses himself from the meeting before she can continue.

Claire calls Mendoza privately and asks him to suggest to his counterparts they still accept her U.N. ambassador nomination, but admits that she knows Mendoza can’t vote for her now with all the media focusing on them. Mendoza admits that he did it on purpose.

Back at the White House, Frank confronts Majority Leader of the U.S. House of Representatives and the leader of the Black Caucus Terry Womack about the DNC’s refusal to nominate Frank, the incumbent, for the Democratic ticket. Terry admits to Frank that it was his idea.

Frank realizes that if he can get the money, he doesn’t need the DNC’s help. Frank starts making phone calls to get money for his run.

Meanwhile, Seth Grayson, Frank’s Director of Communications and one of his “enforcers”, calls Doug to check in. He informs Doug that AmWorks is on hold and that the focus is on the summit with Russia and President Petrov, but this obviously a lie.

3. Jackie Wants to be Vice President

At a restaurant, Jackie meets with Remy and informs him that she wasn’t a part of the plan to deny Frank the DNC ticket. But she says she doesn’t know who is on the list to compete against Frank. Remy tells her that she needs to find out who is on the list. Jackie says that she doesn’t want to be House Majority Whip if she does; she wants to be Vice President for 2016.

Back at the residence, the Underwoods have hit walls after making numerous phone calls looking for support: Frank in finding money to finance his run for 2016, Claire for votes for her ambassadorship.

Jackie then meets with reporter Ayla Sayyad and tells her everything she is about to say is off the record. She then leaks that the meeting between Frank and the DNC lasted only 4 1/2 minutes in the Oval Office, but says nothing more and leaves it to Sayyad to figure out why.

Returning to the residence from a run, Claire discovers Frank huddled and crying on the floor. She lays him down, pulls off his pants, and has sex with him.

The next morning, Claire finds out her ambassadorship has been denied while picking out Easter eggs for the White House event. Frank comes to support her and she gives him a black egg.

At the Oval Office, Frank informs Seth and Remy that he has every intention of running in 2016. Seth and Remy support his decision. But Frank realizes that, like how the egg won’t stand upright because of physics, he can’t run without DNC support. He has to go another route. And that means he needs an event that will ensure his place in the presidency. He decides to give a speech. Seth gets to work.

Seth is interrupted in his office by Ayla Sayyad inquiring about the short meeting in the Oval Office between Frank and the DNC. Seth plays dumb.

Remy and Seth assume the leak is Jackie and confront her. Jackie denies it.

Remy tells Frank he needs to decide if Jackie will be his VP or not sooner rather than later.

Frank shares his speech plans with Claire and she approves.

The next morning Frank tells the DNC he doesn’t plan to run for the presidency. He informs the audience he is lying.

Frank then says that in order for him to truly not run for the presidency, he wants their backing for America Works. The committee seems ambivalent.

Meanwhile, Doug is at home struggling with sobriety when he receives a text from Seth. Seth wants to come over and talk. Seth comes but provides nothing new for Doug.

Frank gives his speech. He goes to say he does not intend to seek the Democratic ticket for 2016. The next day, he tells Heather Dunbar that he wants to de-classify the files about the American injured in a drone strike.

Claire then asks Frank to appoint her to the U.N. position during the congressional recess. Frank say he will. 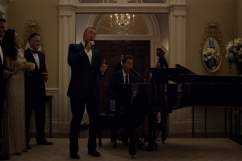 Read More
House of Cards, Netflix
Find out what happened in the second episode here.