Tonight, Katy Perry headlined the 2015 Super Bowl Halftime Show with guest performer Lenny Kravitz. To start off the performance, Pepsi had a futuristic commercial with a UFO as the stadium to present an out of this world performance. Surrounded by orange bubbles below her, Katy Perry stood atop a huge metallic gold lion to kick things off with her song “Roar.” She was wearing a short, gold outfit covered in flames. The lion made its way through the orange lit up bubbles and Perry pulled the reigns.

Perry then got down from the lion and was joined by silver-clad dancers who were meant to look like chess pieces. The lighting on the field provided killer illusions, making it look like the chess board was vibrating and moving beneath them as Perry sang “Dark Horse”.

Soon Lenny Kravitz appeared in his rocker gear to kick off Perry’s original single that put her on the map, “I Kissed A Girl.” Perry grinded a bit on Kravitz and then the two rocked out back-to-back. It was a truly memorable duet.

All of a sudden, Katy Perry was in a beach outfit, with beach ball patterns for her bustier. Surrounded by tons of color in a beach scene, Perry performed her song “Teenage Dream.” She danced with sharks, surfboards, and beach balls. Staying on the same set, Perry transitioned to her song “California Girls” and was joined by dancers wearing retro, polka-dot bikinis.

As soon as that ended, Missy Elliott popped out to perform “Get Your Freak On” with dancers donning racing suits with the name “Missy” printed on them.

Perry joined Elliott in a huge, matching hoodie with her name and the number 49 on it to perform Elliott’s “Work It.” Soon, Perry disappeared and Elliott took over with her oldie but goodie song “Lose Control.”

Perry appeared once again in a silver, star-covered dress with a high slit to sing her song “Firework” as a huge star lifted her and flew her across the field with fireworks shooting from the back of her star. Perry was belted in as she stood on a very small platform and soared across the crowd. Soon, fireworks shot up all across the stadium for an amazing display.

For weeks Perry and Kravitz have been scheming to come up with a killer show. Perry has talked about the live animals she was bringing on stage as well as the surprise performer she had up her sleeves – an old-school female rapper, aka Missy Elliott. Perry’s costumes for the show were created by fashion designer Jeremy Scott and Perry has done a good job of keeping her wardrobe a secret. Now all their hard work has come to fruition.

Get ready! A SUPER sneak peek! Behind the scenes before @katyperry's #SB49 halftime show!! #access pic.twitter.com/vgq6NxUUjf 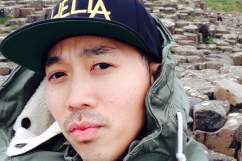