Nick Cannon and Mariah Carey have been all over the news lately. Between twins in 2011 and filing for divorce in January 2015, the long-time former couple have had every detail of their relationship tracked.

In December, 2014, Cannon confirmed on Good Morning America that the two were separated, despite denying rumors in September, according to E!

Despite rumors that Carey was the one getting ready to file for divorce, it was confirmed in January that Cannon filed for divorce on December 12, 2014, according to Glamour Magazine.

2. The Couple Shut Down Disneyland to Renew Their Vows in 2013

In May of 2013, the couple shut down Disneyland to renew their vows for their fifth wedding anniversary, according to UPI. Vow renewal had become an annual tradition for the couple while they were together.

The ceremony was held outside the Fantasyland castle, and Cannon surprised Carey with a fireworks display after.

The event was also to celebrate their twins’ second birthdays.

3. The Couple Have Two Children, a Set of Twins

In April, 2011, Carey gave birth to a set of twins — the couple’s first children — son Moroccan Scott and daughter Monroe.

Cannon told Us Magazine in October, 2014, that his biggest concern was how the divorce would affect their children.

It’s truly just staying focused on family and what’s right and getting through these times and just doing what’s right for the kids. … They’re just happy. They love mommy, they love daddy. We’ve always been people who are kinda on the go, coming and going, so their life hasn’t changed one bit. We spend holidays together, we do everything that we’re supposed to do together.

4. Cannon is Rumored to Have a New Girlfriend

According to Enstars, Cannon has been seen with Nicole Murphy, who is Michael Strahan’s ex-girlfriend.

The were spotted in New York having dinner with a group of people. According to someone at the scene, “They were laughing and having a great time. Nick and Nicole and their friends were dressed to the nines.”

5. Carey is More Than 10 Years Older Than Cannon

Cannon and Carey began dating in 2008, when he was 28 and she was 39. They married the same year with no prior announcement.

They met in Antigua while shooting the video for her song “Bye Bye,” according to Time Magazine. 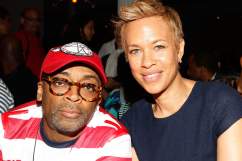