Kim Kardashian is one of the most successful people in reality television and she also happens to be married to one of the most famous music artists on the planet. She has a reported net worth of $85 million, while her husband Kanye West’s net worth is recorded at $130 million. Kim’s annual salary range per year is estimated at $25 – 30 million. Read on for the facts on what Kim spends her money on and how she acquired such a massive fortune.

1. Social Media Has Been a Huge Professional Platform for Her

Kim Kardashian started raking in the dough from social media back in 2009 as Business Insider previously reported that she was making $10,000 per tweet on her Twitter account, having brands and companies pay her to tweet. Since that time, Kim’s Twitter and Instagram account have become huge successes for her in addition to being a means of keeping her highly relevant. Remember when she “broke the internet” with her naked pics for Paper Magazine?

Kim also has her own app and game, called Kim Kardashian: Hollywood, and, according to CNN, the app makes an estimated $700,000 a day. The description of the app reads:

Join KIM KARDASHIAN on a red carpet adventure in Kim Kardashian: Hollywood! Create your own aspiring celebrity and rise to fame and fortune!

So, if you’d like to become a virtual celebrity, you can download the app from Google Play by clicking here. You can also check out more information on the game app when you click here. 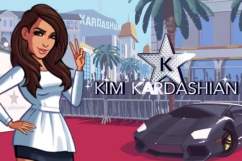 Kim Kardashian’s Video Game – ‘Keeping Up With The Kardashians’

I have something special for you guys! Go to KimsDataStash.com #KimsDataStash LINK IN MY BIO

There have been several reports about Kim Kardashian photo-shopping or retouching some of her Twitter or Instagram photos in the past. In fact, Business Insider reports that Kim spends $100,000 on a professional selfie re-toucher to keep up with her flawless posts. A source told OK! Magazine that:

Kim used to ask a friend to fix up photos, but it would take hours. She finally decided to hire a pro who can be on call 24/7.

So, what else does Kim spend all her money on? She recently put up a huge jungle gym set in her backyard for her baby North West, who she dresses in high-fashion couture and reportedly paid $250,000 for her daughter’s crib. In 2014, Life And Style wrote that Kim was actually burning through about $1 million a month. A source told Life And Style that:

She’s the rich version of living paycheck to paycheck. That woman burns through money like no one else.

3. The Kardashians Are An Empire

Our Kardashian Beauty Hair products have launched!!! Go to Ulta.com LOVING all of your feedback so far! We worked so hard on this and I know you will all love it!!! Xo

In her career thus far, Kim Kardashian has had her hand in many brands from cosmetics lines, paid personal appearances, clothing lines, weight-loss products, perfumes and various retail endorsements. Here is a list of some of the brands Kim has been a part of and has developed on her own as well as with her family:

4. She Reportedly Spends $1 Million on her Beauty Regimen Per Year

#TBT to working with my bestie @makeupbymario

How does Kim Kardashian keep herself looking flawless? … A lot of money. According to Daily Mail, she spends about $1 million on maintaining her beauty each year. Kim did an interview with Into the Gloss and opened up about some of the items she spends her earnings on. Kim said she gets her eyebrows done by Anastasia Beverly Hills and the price for that is $50 for a high-end brow shaping. She also pays to have several makeup artists, from Mario Dedivanovic to Joyce Bonelli to Rob Scheppy. Kim has an expensive at-home LED light therapy machine called Quasar MD Plus that she purchased for her psoriasis. In 2012, Hollywood Life reported that Kim was spending $2,175 weekly on getting pampered, listing her treatments as:

Legs: She gets monthly Fraxel laser treatments ($800) and uses VelaShape ($3,000) once a month to get rid of cellulite.

Recently, Kim has appeared to have other treatments done, making fans wonder if she’s now paying for botox. Kim has been very open about going above and beyond for her looks, like when she got a “vampire facial” done on her show. This is when the doctor draws blood and basically sands down your face as he showers your face with your own blood. It was visibly painful for Kim and a bit creepy.

5. Kim and Kanye Built Their Dream Home for $20 Million Plus They Bought the Property Next Door

North West is getting a home playground fit for a princess http://t.co/hLfL9XAK2e pic.twitter.com/zcCtwZru8E

E! Online reported that Kim and Kanye spent $20 million for their dream home, which was getting built for way over a year. E! News reports:

The Hidden Hills gem sits on 3.5 acres of land and (deep breath) it features two swimming pools, two spas, fountains, a rose garden and (here’s the kicker) its very own vineyard … It also features massive his and her closets, so Kim and Kanye’s wardrobes will have their own luxurious paces to stay!

If that wasn’t enough, the couple also bought their neighbor’s property for $2.9 million. Perhaps they wanted extra privacy as E! reports that the house is a “tear-down” that sits on 1.49 acres. For a while, Kim and Kanye were renovating a home in Bel Air that they had purchased, but they evidently wanted more land, so they decided to purchase another home and simply flip the Bel Air house they had purchased for $11 million. A source told E! News:

They are such perfectionists that staying up-to-date with the latest appliances and home systems, etc., has been exhausting for them. They want to sell very soon, but they might just finish the house enough to get it on the market without trying to make it their perfect home. They have no interest in becoming professional ‘flippers’ but rather have found the entire process exhausting.

Prior to moving into their home, Kim, Kanye, and their daughter North were living with Kim’s mother Kris Jenner.