The movie is due for release on August 14. Straight Outta Compton charts the rise of the NWA throughout the late-1980s and 90s. It looks pretty great with the always wonderful Paul Giamatti as the group’s manager Jerry Heller.

In a March 2015, one of the group’s founders Dr. Dre (I wonder what ever happened to him) recently expressed his reservations about the movie in a radio interview (above). Dre said:

I was just nervous about putting a blemish on our legacy. The story had to be told right. And it’s incredible, man. I’m really excited about it. We had our ups and downs with the filming process, but now the edit is almost done. We’re working on music and what have you, and I think everybody’s going to appreciate it, especially everybody from Los Angeles.

But he added that it was his former-bandmate Ice Cube who got him on board:

I didn’t even want to do the movie. Cube actually quarterbacked it. He went out and got the first draft for the script done. I read it and was like, ‘OK, we can work with this. We can turn this into something. And when [director F.] Gary Gray got on board, that was it. I was in.

Eventually he got on board with it but added that it was tough watching his late-friend Eazy-E on screen, despite the beef the two rappers had.

This is the first trailer to be released on the movie since former Death Row Records kingpin Marion Suge Knight allegedly killed a man after fighting with him on the set of the movie. 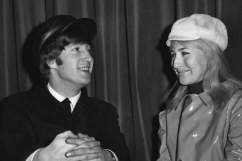 Read More
Breaking News, Movies, Music
Watch the latest trailer from those boys with attitudes who came straight out of Compton.