May 1, 2015 is closer than we thought. That means your local movie theater will be filled with plenty of comic book heads getting ready to watch The Avengers in action.

Captain America, Thor, Iron Man, Hulk, Black Widow and Hawkeye will have to contend with the megalomaniac robot known as Ultron. Two more Marvel characters, Scarlet Witch and Quicksilver, will also be on hand for the big screen madness of Avengers: Age of Ultron. This final trailer showcases each hero and villain in action. Don’t worry, folks. This one is kind of a highlights package of every trailer seen thus far. There aren’t too many big spoilers on display here, which is a good thing.

Check out the action packed scenes and humorous quips featured in this new official trailer in the video above. 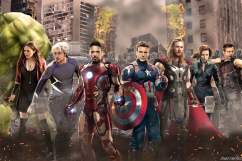