Tomorrow on TODAY: Mr. 305 himself, #Pitbull, will be live in concert from Orlando! #TODAYShow #PitbullTODAY

Pitbull is ready to perform on the Today Show this morning at Rockefeller Center, celebrating the 20th anniversary of the Today Show concert series. The rapper has had his hands full lately with performances as well as new business ventures. He even has four TV shows in the works. Pitbull: The Lyfe is basically a behind-the-scenes look into Pitbull’s career and music life. The REAL Change Project is another show that focuses on the behind-the-scenes issues of top performers, including Tony Bennett, Lady Gaga and Paul McCartney. MasterClass is almost a variety show in that it teaches people different skills like welding, wilderness survival, knife-making and dancing. Lastly, is Pitbull Presents, which is a show about Pitbull’s social circle, according to the Miami Sun Times.

Recently, Pitbull caught a little heat for collaborating with Chris Brown, who still has a bad reputation for his anger and his past attack on Rihanna. But, Pitbull defended his choice to work with Brown on the Howard Stern Show, explaining:

Chris Brown, I don’t think he really got a situation, because growing up around the neighborhoods we grew up in, everybody had that kind of situation. So to me it’s normal. I think Chris is phenomenally talented. He’s one of those guys that’s just too talented … At the end of the day, Chris to me is an amazing talent, and I would work with him over and over and over again … And he, I’m telling you, he’s a good kid, good heart.

Pitbull and Chris Brown’s latest public performance was at the 2015 Billboard Music Awards, where they performed their hit single “Fun.”

Check out the full lineup for the 2015 Today Show concert series season below to see which of your favorite artists will take over Rockefeller Center:

To check out the above performances, arrive around 5:00 a.m. ET at 48th Street between Fifth and Sixth Avenues in New York City on the dates in the above schedule. 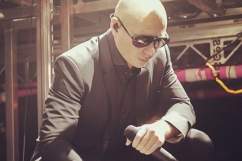 Who Is Rapper Pitbull Dating?