Ashley Pietrowicz, 31, is a true “catfish” on tonight’s episode of MTV’s Catfish in the case of Thaddius Robinson and Sara Jackson. Thad is a corrections officer who befriended someone named Sara Jackson online when he was unhappy in his marriage. He began to notice strange things about Sara and decided to do some digging. He found out that Sara Jackson’s photos were actually a girl named Sara Peccia and the woman behind the deceit was named Ashley. Sara Peccia decides to team up with Thad in order to meet Ashley, who eventually agrees to no longer use Peccia’s photos. However, Peccia told News OK that since taping the show, family members of Ashley have contacted her to warn her that Ashley has not stopped using her photos. Peccia fears that this puts her life in danger.

So, who is Ashley Pietrowicz? One thing we can tell you is that she has a police record. According to Jail.com, she was arrested twice in 2014 for larceny of merchandise and she was also recently arrested for drugs. Pietrowicz was arrested for possession of drug paraphernalia when police found her in an apartment complex parking lot with a bag of black tar heroin.

For more information on Pietrowicz and her Catfish episode, check out the below links: 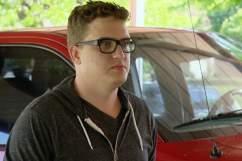