Miss Oklahoma Olivia Jordan has been crowned Miss USA 2015 and Miss Texas Ylianna Guerra was runner-up. Read on for our 5 Fast Facts on the winner below.

1. She Was A Member Of Alpha Phi Sorority In College

Hope you had a very happy and safe 4th!! And thank u for getting this page to 1K followers!??? #thankyou #happy4th #loveyou

When Jordan went to college at Boston University, where she majored in Health Science and she worked as a group fitness instructor as well as a personal trainer. She was also a member of the Alpha Phi sorority and won first prize in a pie baking contest at the sorority bake-off. Prior to college, as a high school student, Jordan was on Student Council, the tennis team, and was the varsity cheer captain.

Jordan has appeared in several commercials as well as movies, including Hot Tub Time Machine 2 and Ted. You can check out her IMDb page by clicking here. After college, Jordan moved to Los Angeles to pursue a career in acting and modeling.

?@laurelaustin An incredible moment — being crowned by the fabulous @brooklynneyoung❤️#missokusa

This pageant queen has been featured in magazines including Vogue Japan, Shape and Cosmopolitan. She’s also walked the runway for Sherri Hill in New York Fashion Week 2015 as well as for Miami Mercedez-Benz Fashion Week Swim 2014.

4. Her Cause Is Alzheimer’s Disease

Olivia Jordan is an advocate for Children of the Night, a group dedicated to getting US children out of prostitution, as well as for Alzheimer’s awareness. She’s hosting the 2015Oklahoma Chapter Alzheimer’s Association Memory Gala and has already helped raise 1.3 million dollars for the cause.

5. Friends Is Her Favorite TV Show

Jordan has several hobbies and one of them is watching the television show Friends. 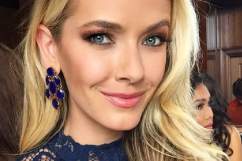