Ari Jennings loves music. She loves her life at the University of Florida. But, most importantly, she loves her family. And the reality TV stardom that goes along with them.

Jennings, 21, and her family are currently being featured on the TLC show I Am Jazz. The show details the daily trials and tribulations of the group, including youngest daughter Jazz, who has been the face of the young transgender community since she appeared on 20/20 nearly ten years ago.

But who exactly is Ari? And what has the oldest Jennings sibling done to help support Jazz? Here’s what you need to know:

1. Jennings is a Senior at the University of Florida

A born and bred Floridian, Jennings opted to stay close to home for college and is just about to enter her senior year at the University of Florida. Jennings is a proud Gator and she’s frequently taken to Instagram to post photos of her friends and family attending events on campus, including a handful of football games in “The Swamp.” She also joined the Greek scene at UF, joining the Alpha Epsilon Phi sorority.

After completing her first year of college, Jennings traveled to Israel with several friends, taking in the sites and history of the area. Throughout the trip, Jennings met with locals, explored the must-see landmarks and even traveled to the Mediterranean.

2.  She Loves to Perform & Is Working Towards a Career as a Singer

One of Jennings’ greatest passions is singing and the 21-year-old has frequently posted photos of her performing onstage to her Instagram profile. Of course, when TLC is spending five days a week in your home, filming your family’s reality TV series, I Am Jazz. She recently added a new photo on the social media site, captioning it:

Words can’t even describe how much I miss performing on stage. Closing my eyes and singing to the world was my escape.

Still, Jennings hopes to get back on stage sooner rather than later. In fact, the teenage college student has discussed her hopes to work in the music industry professionally in the future.

3. Jennings Is A Big-Time Fan of Classic Rock

Jennings doesn’t simply like to sing, her entire life is centered around music, particularly classic rock. The Florida native is a big-time fan of 1960’s rock and has expressed her fandom regularly on social media. Her favorite artist? Jimi Hendrix.

Of course, there’s also The Beatles and The Grateful Dead and The Doors. Jennings doesn’t discriminate when it comes to music.

4. She & Jazz Are Incredibly Close

Although she was slightly confused when she was younger by Jazz’s desire to live life as a girl, it didn’t take long for Jennings to change her tune. In fact, now Jazz and Ari are not only sisters, they’re some of each other’s biggest sources of support.

When Jazz was growing up she’d frequently sneak into her older sister’s room and steal her clothes and toys. Ari also helped Jazz pick her name when she played Princess Jasmine in a stage version of Disney’s Aladdin. Ari described what siblings need to do in order to support a transgender sibling:

So far, Jennings has been the embodiment of her own advice, especially when it comes to her relationship with Jazz. The two talk about everything, from boys to school and Jazz still even steals, or borrows, some of those clothes. Talk about sisterly devotion.

Jennings isn’t simply a middle-of-the-road college student. In fact, the 21-year-old, who hasn’t discussed her major, has been a long-time success on the academic trail. She graduated high school with academic honors and was named salutatorian of her class. 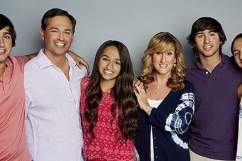 Jazz Jennings’ Family ‘I Am Jazz’: 5 Fast Facts You Need to Know