UPDATE 8/5/16 @ 7:42 pm EDT: If you’re looking for the alleged, new naked photo of Justin Bieber in Hawaii, click here. Original story is below.

Justin Bieber onstage during the Fashion Rocks event on September 9, 2014, at the Barclays Center in Brooklyn. (Getty)

Justin Bieber was caught going for a naked swim while on vacation in Bora Bora, Tahiti, with his rumored love interest, model Jayde Pierce. Twitter fans exploded with the news and began to retweet the explicit photos, which you can see here, here and here. Warning: They are very NSFW. 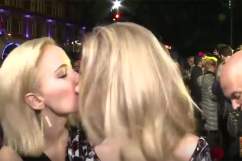 According to The New York Post, Bieber was last seen out with Pierce in May. Pierce is a United Kingdom-based model, blogger and Youtuber.

What do you think of Bieber deciding to bare it all with his latest love interest? Comment below.

Read more about Justin Bieber in Spanish at AhoraMismo.com: