When Lamar Odom suffered several strokes after overdosing on drugs at a brothel in Las Vegas, Nevada, Khloe Kardashian flew to be by his side though she was dating James Harden. Odom and Kardashian’s divorce was almost finalized, but Kardashian decided to pull the plug and remain married so that she could help Odom try to recover. Odom still is reported to be dating Harden and recently told Ellen DeGeneres the reason she decided to call of the divorce, explaining:

I’m there helping him and I love him and I always love him. It’s a really insensitive thing to fast forward a divorce. I love him and I always will … and he’s a fantastic person who deserves support and love and for someone to be by his side and for me I’m that to him. And thank God I have a fantastic family who loves me and loves him just as much. And they’re so supportive and they’re with me and I have a great boyfriend who’s understanding.

As for Odom’s progress while trying to recuperate, she said:

He couldn’t put a lot of words together today. But he understands. He’s really confused a lot. We have to remind him. Sometimes he knows who the president is. He thinks he’s 26. I say ‘I bet you wish you were 26, so do I.’

Kardashian also says that Odom has to relearn how to walk and feed himself and construct sentences.

Kardashian jokes that she’s now into polygamy because of her little love triangle, calling it “definitely a very unique situation, to say the least.” 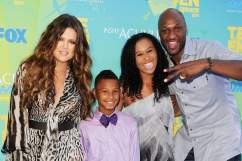