Tonight was the 2015 Miss Universe pageant and we’ve got all the details on how it went down. And the winner is … Miss Philippines Pia Alonzo Wurtzbach. Host Steve Harvey first announced Miss Colombia as the winner and it was extremely upsetting for all when the mistake had to be corrected.

The second runner-up was Miss USA Olivia Jordan, which narrowed it down to Miss Colombia and Miss Philippines for the win.

The three finalists in tonight’s Miss Universe 2015 pageant were Miss USA Olivia Jordan, Miss Colombia Ariadna Gutierrez and Miss Philippines Pia Alonzo Wurtzbach. For her final statement, Miss USA said that her passion is what makes her the next Miss Universe. She wants to bring equality among men and women and hopes to empower women all over the world. Miss Colombia said that she should be the next Miss Universe because she wants to be the third representative of her country to win. She said she is a true Colombian woman and exudes everything a Miss Universe should have. Lastly was Miss Philippines. Her statement was that being Miss Universe is an honor and responsibility. She hopes to bring HIV awareness and help children all over the world.

The three finalists were narrowed down from the top 15, then the top 10, and finally, the top 5, after 80 contestants competed for the title. It was actually supposed to be 81, but Miss Slovenia suffered a medical episode that left part of her face paralyzed.

Check out the run-down of the top 5 contestant interviews below:

Miss Australia – Miss Australia was asked about the continent’s taking steps to legalize marijuana. She said that when it comes to helping those who are sick, it would be a definite plus, but the government should weight both options.

Miss France – Miss France used an interpreter to answer her interview question and she was asked about the rising threat of terrorism. She said that first we have to find out where the threats are coming from and must find the problem at its heart. It was a very vague and general answer in our opinion.

Miss Philippines – Miss Philippines was the first of the top 5 to answer an interview question. She was asked if the United States should have a military presence in her country. She basically stated that they are very welcoming with Americans and she doesn’t see a problem with it at all. After her answer, host Steve Harvey joked about how well she nailed that answer.

Miss Colombia – Miss Colombia was asked about the drug problems in the world. She said that she believes the problem starts at home and children must be educated in why doing drugs is bad.

Miss USA – Miss USA was asked about her views on gun control, citing the Sandy Hook and San Bernadino shootings. She said that she thinks it’s important that people have the right to protect themselves, but it’s important to look at safety issues as a whole. Miss USA got cut off at the end of her answer, but she handled it with a laugh like a pro. 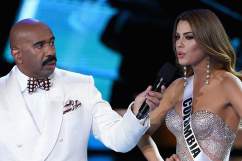 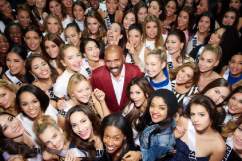 Read More
Miss Universe
Who is the winner of the 2015 Miss Universe Pageant? The contestant who won is ... Miss Philippines Pia Alonzo Wurtzbach.