Porsha Williams was vacationing with her fellow Real Housewives Of Atlanta cast members when she met a new man named Oliver, who joined the girls in their adventures. Williams decided to go out on a date with Oliver one-on-one after her boyfriend at the time, athlete Duke Williams, was not returning her phone calls. When he tried to kiss her on camera, she was a bit stand-offish, but the two apparently carry on a little romance afterwards.

When chatting with Oliver, Porsha tells him that she makes her own money and has been through a lot in relationships, but she’s still open to finding love.

So, is Porsha still dating Oliver? She definitely confirms that she has a new man in the below interview with Bravo, but she does not reveal her boyfriend’s identity. Check it out below.

On last week’s episode, the night took a violent turn when guest cast member Tammy Browning’s nephew Glen Rice, Jr. was asked to leave the RHOA vacation house. Tammy ended up being thrown to the floor and was knocked out cold. In turn, she was taken to the hospital and was pretty much kicked off the show, along with Rice. Porsha’s “friend” Oliver was at the house earlier in the night, but when Porsha sensed that there was trouble brewing, she sent Oliver home. 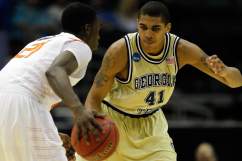