Haley and Emily Ferguson are the blond twins on The Bachelor 2016. When star Ben Higgins first saw the two sisters, he issued a group hug as he was delighted. So, let’s get to know these girls and BEWARE OF SPOILERS. There are some major ones below.

1. Their Mother Appears On The Bachelor

Haley and Emily’s mother makes an appearance on the show and it’s way before the Hometown dates. Ben Higgins takes the twins on a two-on-one date in their hometown of Las Vegas where tonight’s episode takes place. They drive around town together and end up at their home, where we get to meet their mom. Check out a clip of it above.

2. Haley Gets Eliminated And Emily Gets to Stay

During Higgins’ two-on-one date with the sisters, as usual, the star sends one girl home. This time, both girls are already home and Haley is the one eliminated. So, she stays home with her mother and Emily continues her journey on The Bachelor. Higgins felt it was necessary to have this date so he could get to know the girls individually and not just as a pair. 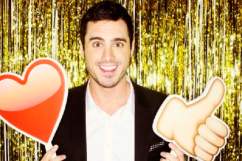 3. Emily Does Not Win The Bachelor

Who's ready for another episode of The Bachelor?!? #thebachelor #teamfergie #rocknroll #twinning

Unfortunately, neither of these two win the heart of Ben Higgins this season. On episode 7, before the final four hometown dates, Emily is eliminated. According to Reality Steve, on the day of the rose ceremony Ben took Emily to meet his parents. After the get-together, Ben decided to send Emily home.

So who wins The Bachelor this season? To find that out, check out the below link:

4. The Twins Have a Lifestyle Blog Together

Go check out today's article on our blog that's all about @perrywinklephoto ??? her work is absolutely amazing!

Haley and Emily have a lifestyle blog called “Blondesense”. They have the blog with a friend of theirs and it includes posts about traveling, fashion, beauty and recipes. The “About” section of their blog reads:

We are a lifestyle blog specializing in beauty and fashion. Some of our other posts include food reviews and recipes as well as fun home, relationship, travel, and health tidbits. Three of us run this blog together: Twins Haley and Emily Ferguson, as well as lifelong friend Mace Camp. Stay tuned for content you won’t want to miss!

To check out their YouTube channel, their channel title is Blondesense702.

5. The Bachelor Is Not Their First Reality Show

This is not the twins’ first time on reality television as they previously appeared on the Dallas Cowboy Cheerleaders competition show.

Emily and Haley are models and entertainers. They worked together as cocktail waitresses at Marquee in the Cosmopolitan hotel in Las Vegas.