Guess who is one of the contestants auditioning on American Idol for its final season? Kanye West steps in front of the judges, joking that he’s a brand new rap artist while his pregnant wife Kim Kardashian waits out in the hall with Ryan Seacrest. Kardashian tells Seacrest she believes in her husband and knows he has what it takes to make it on the show. Inside with the judges, West kids that he always wanted to be a rapper but no one really ever believed in him.

Check out a short clip of the audition below as well as Kanye’s contestant introduction video above.

She'll have a ass like Serena, Trina, Jennifer Lopez, four kids… And I gotta take all they bad asses to showbiz! ? @kimkardashian

So, do you think Kanye has what it takes to be the next American Idol?

definitely the biggest surprise from the road. Increased my vertical by at least 2in – @ryanseacrest #IdolPremiere 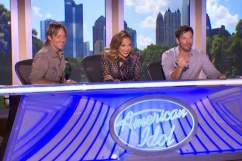