Tragedy strikes The Bold and the Beautiful in the coming days as Nicole (Reign Edwards) will soon be dealing with health issues related to her pregnancy. However, she’ll quickly learn that her best friend Sasha (Felisha Cooper) isn’t someone she can rely on.

Read on to see what lies ahead for Nicole and Sasha in Wednesday’s B&B spoilers. 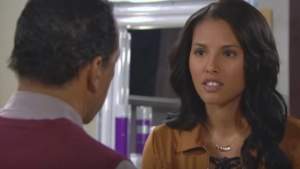 Pictured left to right, Julius and Sasha, as the latter has it out with her father in Wednesday’s B&B episode. (CBS Screenshot)

Although Nicole’s health issues aren’t potentially deadly they are detrimental enough to be a nuisance on her day-to-day activities. The issues surrounding her pregnancy “will shake up Nicole’s life and open a door of opportunity” for her bestie, Sasha to get cozy with Zende (Rome Flynn), according to Celeb Dirty Laundry.

The site reported that Zende welcomes Sasha’s interest in him. Making matters worse, Zende finds out about them, causing Nicole to question Zende’s character. In other words, Zende’s attraction for Sasha contradicts his promise to stand by her during the pregnancy.

Sasha’s inclination for Zende was encouraged by Julius’s (Obba Babatunde) shortcomings. Julius failed to take her on a trip to Hawaii. Celeb Dirty Laundry stated that she’ll “lash out at her dad for leaving her behind.”

Vivian (Anna Maria Horsford) sides with Sasha while Julius may want to speak to Sasha about pursuing Zende. However, Julius comes to the realization that he’s losing his grip on Sasha. Evidently, Julius is seeing the effects of the mistreatment of his daughter. However, her resistance isn’t the only issue that Julius will be riddled with as Celeb Dirty Laundry reported that “more than 18 years of Julius’ bad deeds are coming home to roost.”

Sasha may not want to ruffle any feathers until she’s completely settled in Los Angeles. However, Zende isn’t having the easiest time dealing with the fact that the baby isn’t his.

The Bold and the Beautiful airs Monday thru Friday at 1:30pm ET on CBS. Be sure to check back with Heavy for all B&B holiday scheduling news.