The Bold and the Beautiful returns on Friday with an all-new episode as Quinn (Rena Sofer) tries to wake Liam (Scott Clifton) up while Steffy (Jacqueline MacInnes Wood) cries over a text from Liam’s phone.

Quinn Succeeds at Keeping Liam Away From Steffy 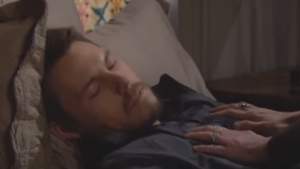 Between the after-effects of his concussion and misunderstanding with Steffy, Liam hasn’t had the best of luck lately. Making matters worse, Quinn continues to conspire against him with the hopes of getting Steffy to fall for Wyatt.

On Thursday, Quinn tried waking up an unconscious Liam, who passed out while trying to exit Forrester Creations. When she realized he wasn’t regaining consciousness, she placed him in his own backseat and drove his car to her cabin in Topanga Canyon.

Adding insult to injury, she texted Steffy with his phone, acting as if he didn’t want to meet her.

On Friday, Quinn — evidently trying to save some sort of face — unsuccessfully tries nudging Liam to wake him up from her couch.

Meanwhile, Steffy gets even more emotional after receiving a text — thinking it’s from Liam — that he’s “not coming home.” Wyatt continues trying to console her, even playing it off like he doesn’t want her to assume the worst.

Steffy reads the text and vents to Wyatt about it.

Wyatt continues being her emotional rock.

Bill Could Bring Up His Feelings to Brooke 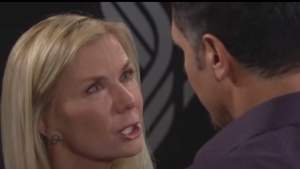 Pictured left to right, Brooke and Bill, who clearly have some unfinished love business that could get in the way of Bill’s marriage to Katie. (CBS Screeenshot)

Brooke clearly didn’t know what she was getting herself into when she took the job at Spencer Publications. Unbeknownst to Katie (Heather Tom), Bill shared an intimate kiss with Brooke behind closed doors. After deeming it inappropriate, Bill has continued to fantasize about her romantically in both the past and present.

Lately, Bill’s been able to keep it to himself as Brooke works with himself and Katie on the company’s direction.

On Friday, it appears that Bill can’t resist the urge to still his feelings to Brooke. In response, Brooke reminds him of the obvious; he’s a taken man, More importantly, committed to her sister.

“You have a wife. You’re married to my sister.”