Tonight is episode 2 of the six-episode mini-series for the revival of The X-Files. Read on below for our live recap.

At the beginning of tonight’s episode, a Dr. Sanje is scanning his pupil to be admitted into a building for Nugenics Technology. He feels a ringing in his head and his eyes are becoming red. The doctor enters a meeting and he is clearly not focused on what’s going on. The ringing returns and he starts to hallucinate. He looks out the windows and sees hundreds of black birds. The ringing increases and he begins to lose control of his body. As a result, he runs out of the room, apologizing to his colleagues. Hearing the words, “Do it now. Data is the key,” he retreats to the computers. Security and his colleagues bang on the door trying to stop him from downloading whatever files are on the computer. The ringing gets so intense that he ends his life, stabbing himself in the ear.

Mulder and Scully investigate the scene and explain that they have security clearance. They need to find out what the doctor was trying to access before he died. Scully provides distraction while Mulder takes the doctor’s phone from his pocket.

Mulder meets up with a “secret” colleague of the doctor and realizes they are being watched. Mulder requests they go somewhere more private and the man takes it as a come on. Mulder then lets the man know that Dr. Sanje is dead. As Scully examines the body, we see the doctor is holding something in his hand. His hand was clenched to hide the words “Founders Mutation.”

Scully and Mulder venture to the doctor’s home to investigate. They find dozens of photos of children with deformities on the wall. Mulder opens up a drawer and immediately suffers the same kind of painful ringing that the doctor endured before killing himself.

In the next scene, Scully and Mulder bring the files from Dr. Sanje’s home to Skinner. A third party gives Mulder and Scully a harsh warning about releasing the files. Fortunately, Mulder made photocopies. Once the man leaves the room, Scully tells Skinner that she and Mulder need more time to investigate.

Scully starts going through surveillance footage and, when Mulder comes into the room, she asks him what happened to him at Sanje’s apartment. He then explains the high-pitched noise in his head and the words “Find her,” that were ringing in his ears. Scully worries that Mulder may succumb to the same fate as Dr. Sanje. Mulder says Augustus Goldman might know how to connect the dots. When the duo tries to visit Goldman at a hospital, they ask if they could meet privately with him, saying that he’s under investigation. A girl named Agnes in the hospital, pleads with Scully and Mulder to get her out of the hospital. She tells them that her baby isn’t right and that everyone there has the same story. She says she doesn’t want to have to give her baby up no matter what. Mulder gives the scared girl his card. Mulder believes the women are another part of the whole scheme.

Scully brings up to Mulder their baby William who they gave up … that he would be 15 years old today. Mulder assures her that giving him up for adoption was what she needed to do to keep him safe.

Scully flashes back to taking her son to school years ago. Then we see her son on a stretcher injured with a broken arm. The memory then shows her son with a mutated face in his room. Clearly, it was a daydream.

Mulder and Scully meet with Goldman and a woman who appears to be his assistant. Goldman tells the duo that he works to save children and he takes them past a row of windows showing children with severe deformities and disorders. Goldman says he is searching for the key to what has caused all of these disorders. As a girl has an outburst in the hallway, Goldman tells them that their time is up with him. Mulder then gets a text that something happened to the girl Agnes who he had given his card to. They find her dead in a hit and run, with no baby. The baby was surgically removed. Scully says that baby was the only proof that Agnes was a patient of Goldman’s.

"You're talking about changing the genetic makeup of a population…" -Scully #TheXFiles pic.twitter.com/uSQ13n9tGE

Mulder and Scully are back at the hospital, visiting a patient who is Dr. Goldman’s wife. She doesn’t reply to them at first, but throws fruit at a cat in the room. Mrs. Goldman says she cannot answer any questions about her husband because he’s the one keeping her there. Mulder asks her if she misses her daughter Molly. Mrs. Goldman reveals that there was something strange about her daughter. She was at the bottom of their pool for 10 minutes and was successfully breathing in the water. She says that her husband did something to the embryo and experimented on their daughter. When pregnant with their son, she tried to leave and ended up stabbing her husband in his arm. Dr. Goldman had taken their daughter away and Mrs. Goldman says that her husband worked for the government. When trying to escape, she hit a deer and flipped her car. She reveals that she then heard a piercing sound in her head and that it was talking to her, telling her to cut open her stomach. She says “they” told her she killed her baby, but she insists she just “let him out.” She never saw her son again.

At one point, Mulder realizes that there’s a connection to the janitorial staff at the hospital and Dr. Sanje’s death.

Scully and Mulder pull up to the house of a janitor from the hospital. His mother answers the door and says she doesn’t want to expose her son to a stressful situation. Mulder asks the mother where she found her son Kyle, saying that she didn’t give birth to him. All of a sudden, they see the black birds in the yard. The mother cries that “bad things happen when the birds gather.” Suddenly, Mulder starts suffering the pain of the unbearable ringing. Scully ventures off to find the boy, handcuffs him and takes him away. His mother cries that her son didn’t know what he was doing and that Kyle was just trying to protect his mother. Mulder asks him why he killed Dr. Sanje. Kyle says he just wants to find his sister Molly and Scully says that she knows who knows. Scully then takes Kyle to Dr. Goldman, who wants to do a blood test on Kyle. Kyle then asks Goldman where Molly is …

Goldman lets Kyle meet Molly, who was the girl that needed to be restrained earlier. Kyle then tells Goldman that the girl is not Molly. He says she’s not his sister. As Kyle runs out of the room, he comes to find his real sister Molly. She can speak to him with her brain and he can hear her thoughts. Together, they break the glass to her room. Kyle uses his powers to make his father’s eyes, mouth and ears bleed to death. Molly’s powers send Mulder and Scully flying backward.

Molly and Kyle end up escaping and Mulder makes off with Kyle’s blood sample.

In the next scene, we see Mulder sitting with a boy (his son) watching television, then firing off a rocket in the yard. He then flashes to seeing his son levitating in a bedroom, being taken away by what appears to be an alien force. Again, this is clearly a daydream. 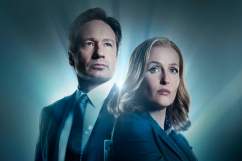 Read More
TV
Tonight is episode 2 of the 2016 revival of The X-Files. We've got the live recap and spoilers on the episode, plus more season 10 info. Tune in tonight.